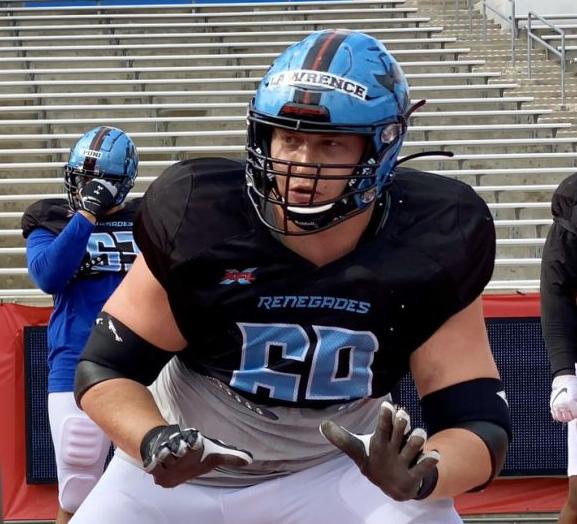 Has he sometimes wondered where his next opportunity would come from? Sure. But he has always known that one day he’d take the field as a professional football player on the sidelines at the Ballpark in Arlington.

If your eyebrows raised a bit at the location of where Lawrence could take his first professional snap in a regular-season game as soon as Sunday, Feb. 9, then you’d be both correct and, hopefully, intrigued.

But, first, let’s take a refresher course on how he got to a football field next to a baseball stadium that is across the parking lot from an even more massive football cathedral in Arlington and became the first-ever Waxahachie or Ellis County athlete drafted by the resurgent XFL.

Lawrence was a dual-sport athlete at Waxahachie High School, starring on the offensive line for the Indian football team and learning to maximize his 6-foot-6 length and athleticism to become a decorated swimmer.

He graduated in 2014 at 255 pounds and departed for Baylor University in Waco as a three-star offensive tackle as rated by 247Sports.

Once on campus, Lawrence appeared in 51 games – which included starting in 37 consecutive games to end his five-year career – and was named to the Academic All-Big 12 team three times. He also suffered a back injury during his redshirt-senior campaign that led to offseason surgery and forced him to miss the Baylor pro-day. That lack of one-on-one time in front of professional scouts ultimately led to his going undrafted in the 2019 NFL first-year player draft.

Lawrence did, however, sign his first professional football contract with the Arizona Cardinals as an undrafted free agent on Aug. 2, 2019. He ultimately appeared in all four preseason games at offensive tackle before being released when the rosters trimmed from 90 to 53 players at the conclusion of training camp Aug. 31, 2019.

Lawrence does not look back on his time in Arizona with any ill-will, either. He instead chooses to applaud the men who made the 53-man roster and uses the experience to reflect on areas of possible improvement.

Lawrence said there were no formal “you need to work on this, kid” talks when he was excused from the Cardinal organization. He did meet with first-year NFL head coach Kliff Kingsbury and the offensive leadership before departing for Waxahachie.

Yet, even with a positive takeaway from those talks, it wasn’t a pleasant discussion.

“No one looks forward to that day,” Lawrence said. “Everyone grows really close in camp, and then you go from 90 people to 53, so it’s like taking your workplace and cutting it almost in half. Coach Kingsbury praised me as he did it and I think I could potentially have a fit there next year or in the future, and I hope I do because they are a top-of-the-line organization. They have a lot of potential for success in their future.”

Under Kingsbury, the Cardinals finished the season 5-10-1. According to Pro Football Focus, the Arizona offensive line featured four starters who took more than 1,000 snaps in 2019, including all five regular starters taking over 840 snaps in protecting No. 1-overall draft pick and quarterback, Kyler Murray. All of that translates to the Cardinals having consistent, reliable play on the offensive line and not needing to carry extra backups.

As for Lawrence, he was technically unemployed before the season ever truly kicked off. He remained optimistic about his future but was jobless nonetheless.

In years prior, his search for a job in professional football would require one of two things: 1. Wait for a slew of significant injuries to fellow offensive lineman currently employed by NFL franchises or 2. Apply for a job selling tickets to Sunday games like the rest of us.

Luckily for Lawrence and football fans in general, there was another option. There was also a third after the second one hit a speedbump.

READY FOR SOME ‘XTREME’ FOOTBALL?

Lawrence was one of 12 offensive linemen drafted by the Dallas Renegades and the only one from a university in Texas when the XFL held its inaugural player draft Oct. 15-16, 2019. The selection made him the first – and only – Waxahachie alumnus or Ellis County athlete to be drafted by one of the original eight XFL teams.

Though Lawrence and a couple of others on the Dallas o-line had prior NFL experience, offensive tackle Willie Beavers was the lone Renegade of the group to have been previously drafted by an NFL franchise (No. 121 overall, 4th round, in 2016 by the Minnesota Vikings).

For those unaware, Vince McMahon, of the professional wrestling lore, and his Alpha Entertainment company have worked for the better part of two years to bring the once-defunct “Xtreme” Football League back from the grave it dug itself in 2001.

Each of the eight teams plays 10 regular-season games with the top two teams from each division – West and East – advancing to a two-round postseason.

All 40 XFL regular-season games and six three playoff games will air nationally on ABC, ESPN or FOX Sports affiliates. The season lasts 79 days from Saturday, Feb. 6, through the XFL Championship on Sunday, April 26.

And, for any skeptics, the new version of the XFL appears to be focused on football and in-game experience – not late hits mirroring wrestling moves, witty nicknames on the back of jerseys, actual wrestling moves to determine the opening possession or poorly televised games featuring underwhelming on-field talent.

Unlike its first go-around, the XFL is now largely being considered a developmental league for players who still possess NFL aspirations. Players like Lawrence.

“I don’t really remember anything about the previous XFL but I can guarantee that this one will be as exciting and professional as football can get,” Lawrence said. “We’ll have explosive offenses and, with the play clocks at only 25 seconds, it’ll be quicker with no waiting around or standing around. It’ll be quick with a lot of action.”

He added, “[...] I’m used to tempo. It was the same thing at Baylor and in Arizona, too, so it’s not foreign to me. We are just working on getting everyone used to that.”

At the time of his interview with KBEC Sports, Lawrence and the Dallas Renegades were in the midst of minicamps in the indoor facility at Arlington High while Globe Life Park – the former home of the Texas Rangers and more commonly known as The Ballpark in Arlington – underwent its transformation from a baseball diamond to an all-grass football field.

“It’s been good so far and has been pretty similar to the NFL and pretty similar to college,” Lawrence said at the time. He explained the team used the home locker room, training facilities and press box (for meals) at Globe Life daily, noting it was surreal at times to watch the stadium he grew up watching Ranger infielders field groundballs on turn into his future football home.

The Renegades then moved from minicamp into training camp and shifted focus to their first regular-season game scheduled for Sunday, Feb. 9. Lawrence was still adjusting a few minor rules changes and learning a new playbook.

Things were going swimmingly for Lawrence under Dallas head coach Bob Stoops and legendary offensive coordinator Hal Mumme. He then fell victim, again, to the dreaded roster cut — this time from 70 players down to 52 — this past Wednesday.

His second brush with unemployment was thankfully brief.

Lawrence quickly received a second shot with the XFL with his selection to “Team 9” on Friday, Jan. 31. He is joined by CJ Collins, a former quarterback at Southwestern Assemblies of God University in Waxahachie.

It’s an opportunity and idea that is new to professional football ... and professional mainstream sports for that matter.

The XFL is still an eight-team league. Its commissioners, however, decided that a ninth “team” was needed. The 40 players on this team’s roster will be available to any of the other original eight as injuries begin to take their toll.

In essence, “Team 9” is the farm team for the farm league. It’s also based at Globe Life Park in Arlington.

“In every football league, there is constant churn,” stated XFL CEO and Commissioner Oliver Luck in a league-issued press release. “I’m sure every one of these rosters is going to change by the time Week 1 rolls around. They’ll bring in new guys or someone pulls a hamstring, it’s just inevitable.

“So, Team 9 will be ready to roll as a replacement team that’s got to be constantly replenished, so all these guys that got the bad news about getting cut, a bunch of them are going to be back in the league through Team 9.”

According to the official announcement, XFL director of scouting Eric Galko will oversee the day-to-day operations of Team 9, which shares some resources with the Dallas Renegades but will operate as its own entity. Bart Andrus, who has coached for four decades in the NFL, CFL and NFL Europe, will serve as the head coach for Team 9.

The release notes that teams will be required to replenish their rosters from the Team 9 roster beginning in week 2. The 40 players currently on Team 9 will then be absorbed by the original eight XFL teams in week five — when rosters expand from 52 to 57 players, though gameday rosters will remain at 46.

At that point, the release notes, the Team 9 roster will be refilled with around 36 players from outside of the XFL portal.

“Guys that are on the Team 9 roster today, probably a quarter of them will end up starting multiple games in the XFL this season,” Galko said. “Their dreams aren’t close to being dead.”

Lawrence hopes that his time during the preseason with the Cardinals, combined with a potential showing during the XFL season and continued training with Waxahachie football legend and Kansas City Chief Ring of Honor member, Brian Waters, will bode well for a return to an NFL roster.

After all: He’s never doubted his football future.

“It’s my dream to be in the NFL and I am hoping that this year in the XFL is a stepping stone to fulfill that dream,” Lawrence said. “My experience in Arizona was awesome and I got to play for a lot of great coaches and meet a lot of top-of-the-line players, as well. I just kind of learned from my experience there. And, hopefully, that will make me a better player. I’ve been working hard since then and I hope to continue to develop here in the XFL.”