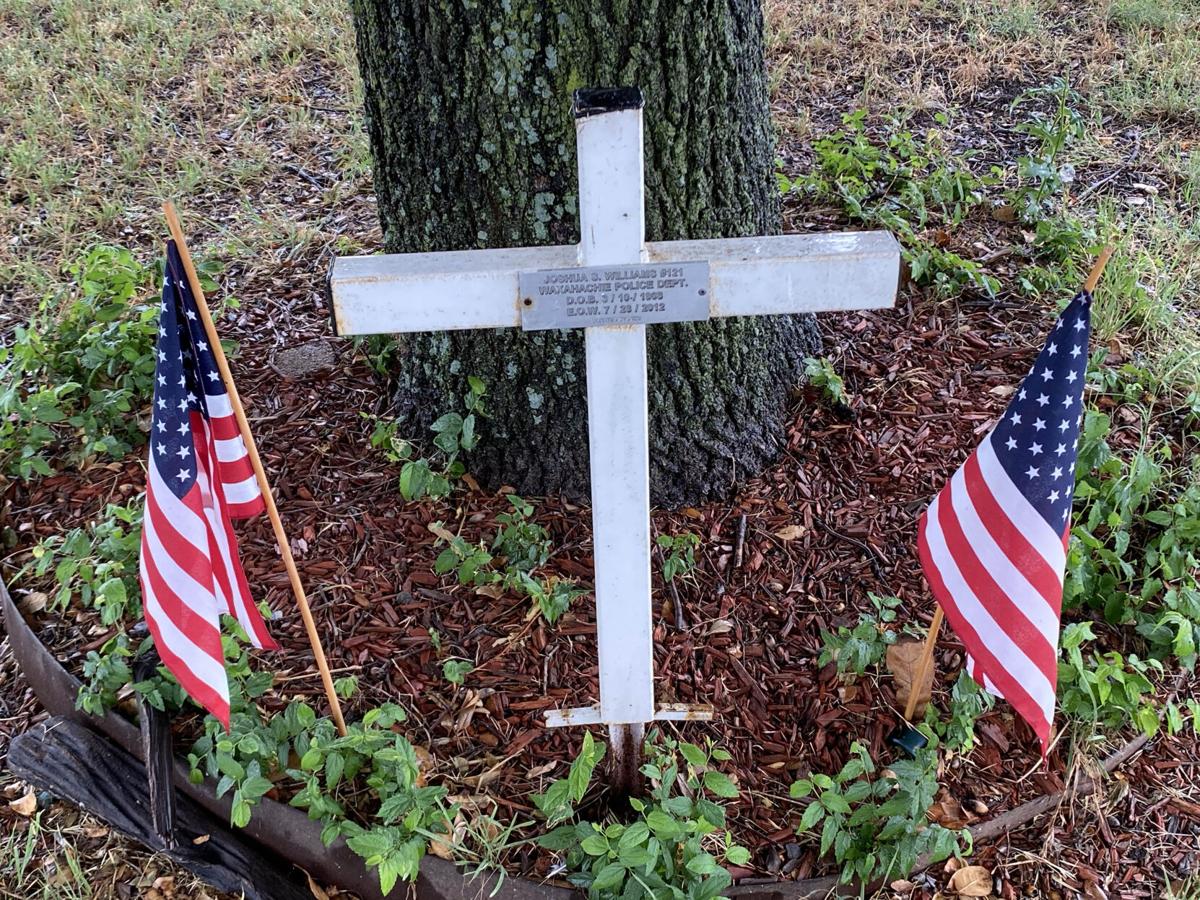 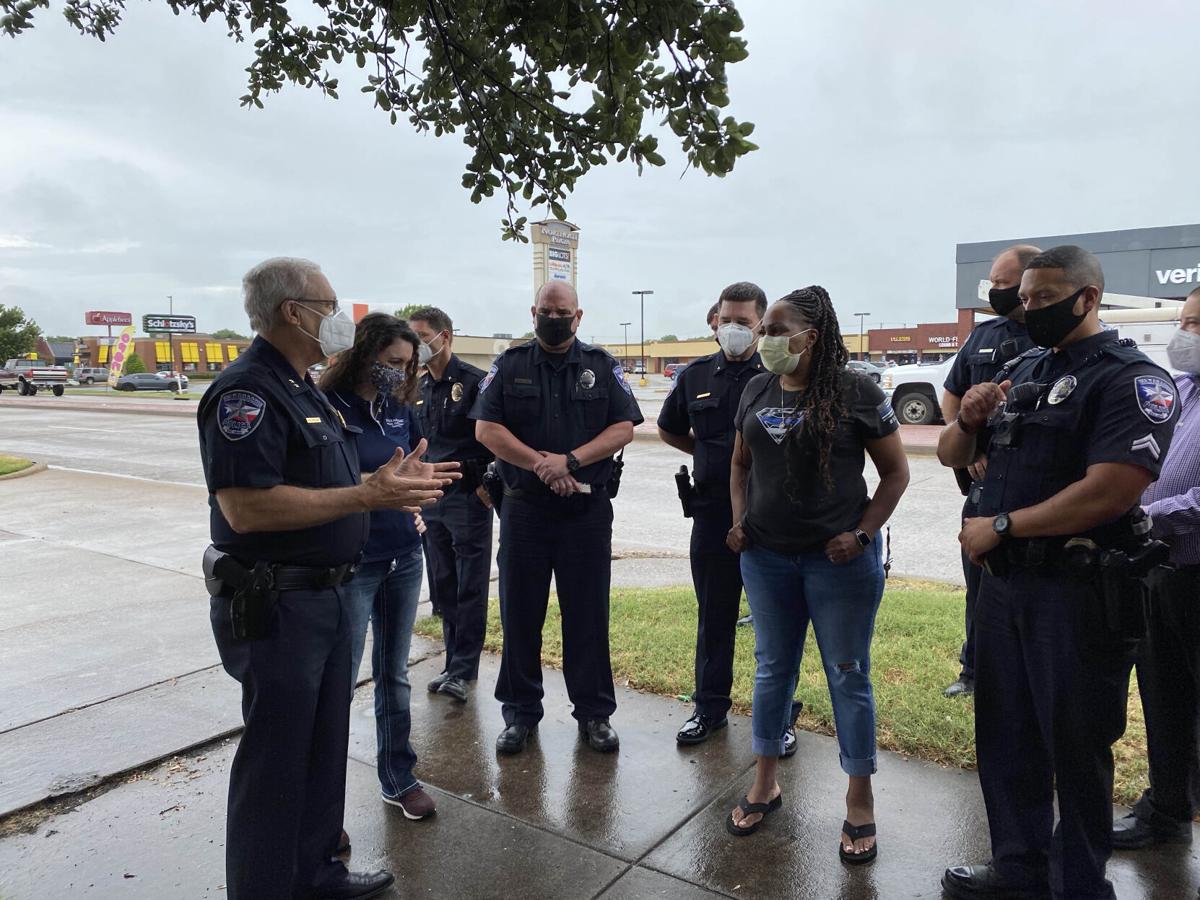 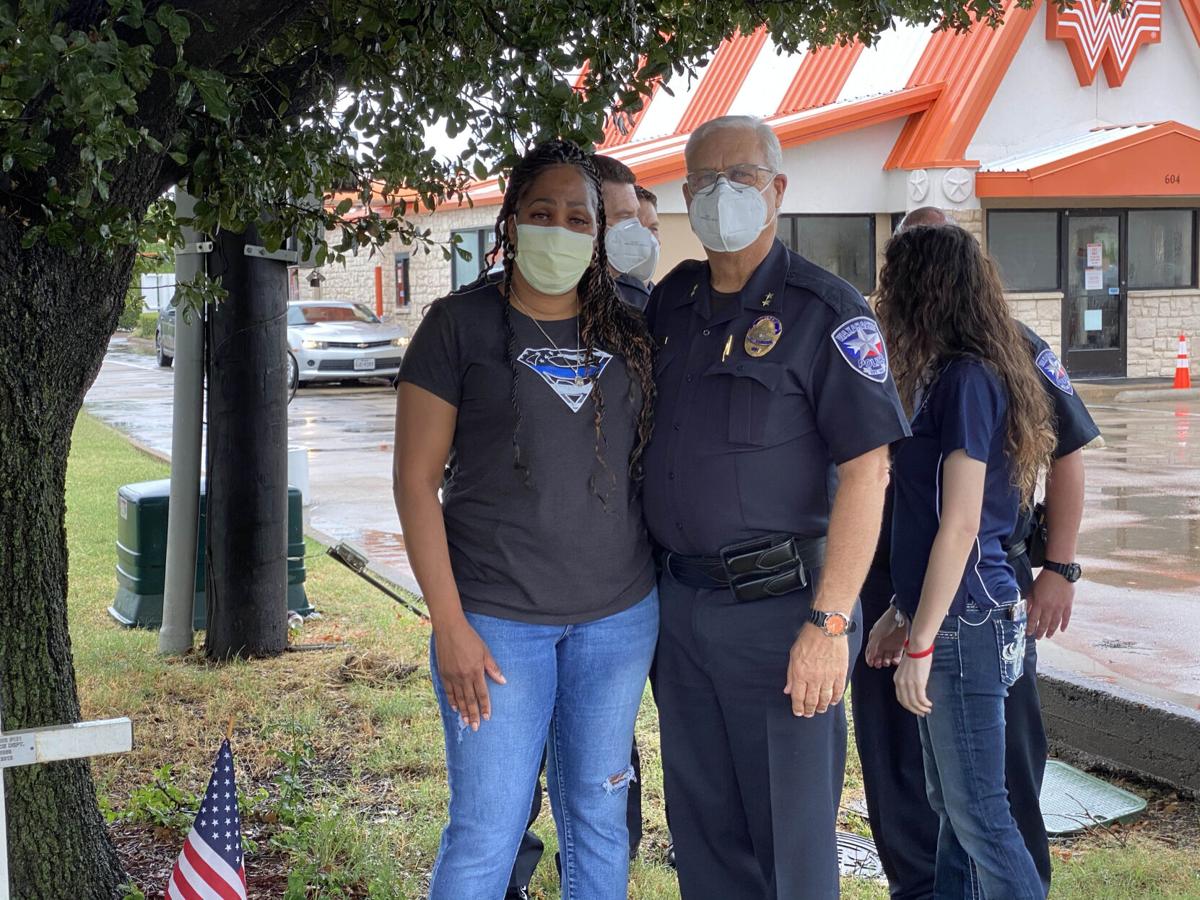 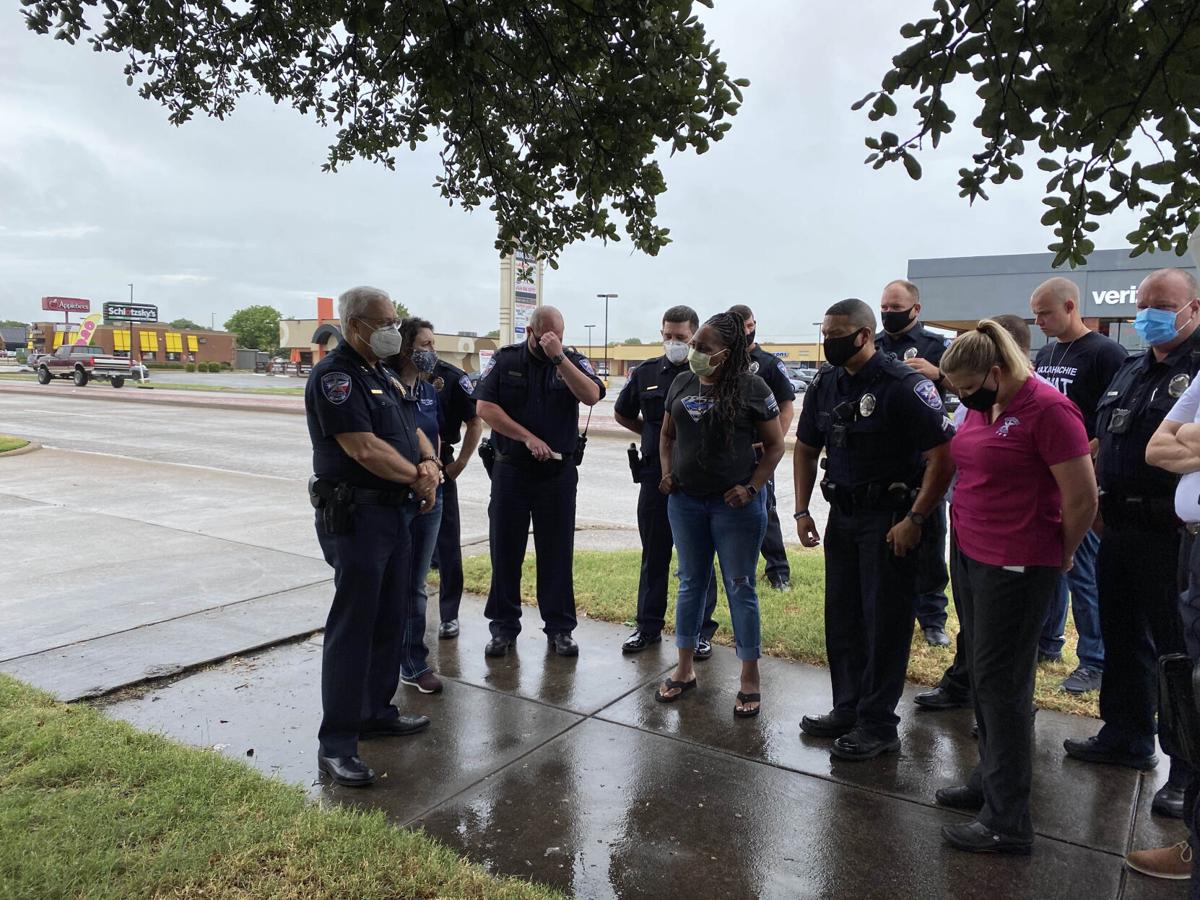 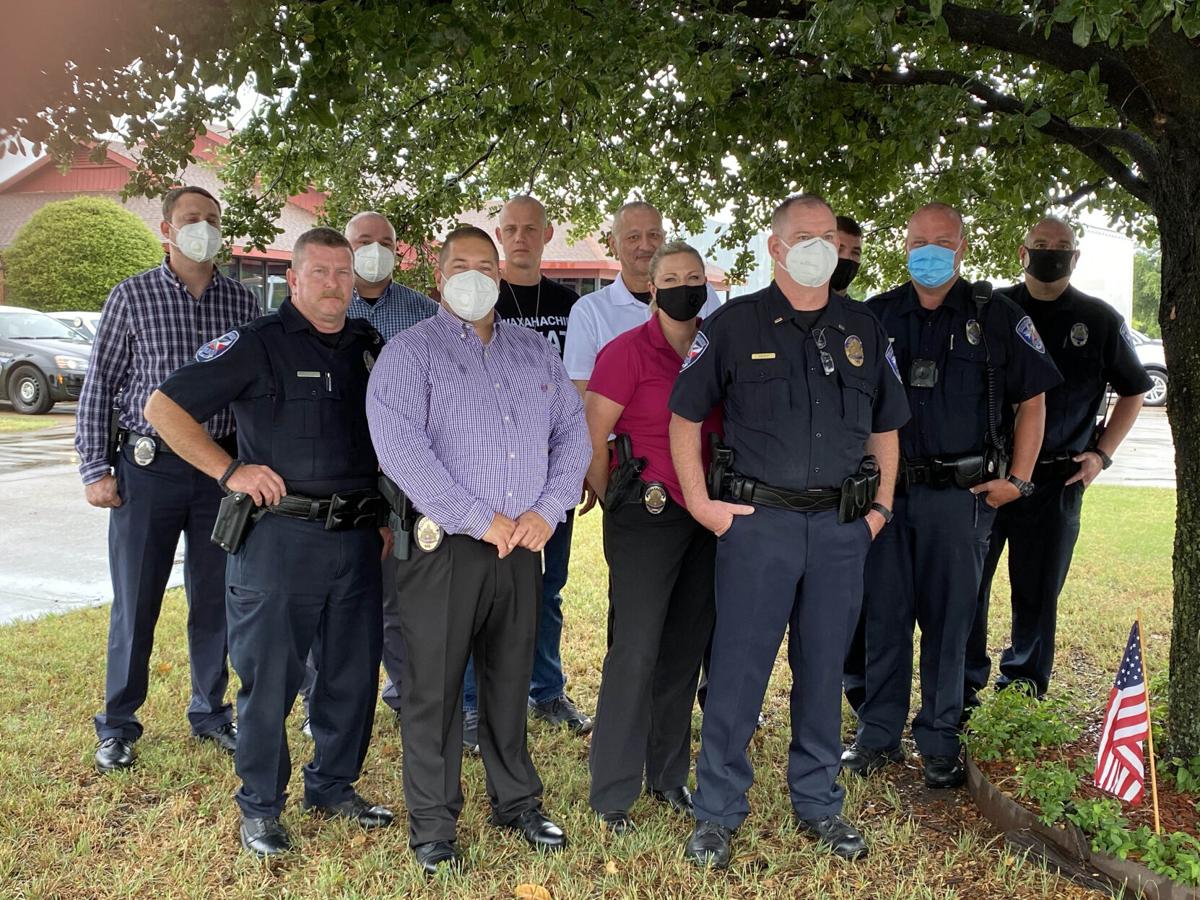 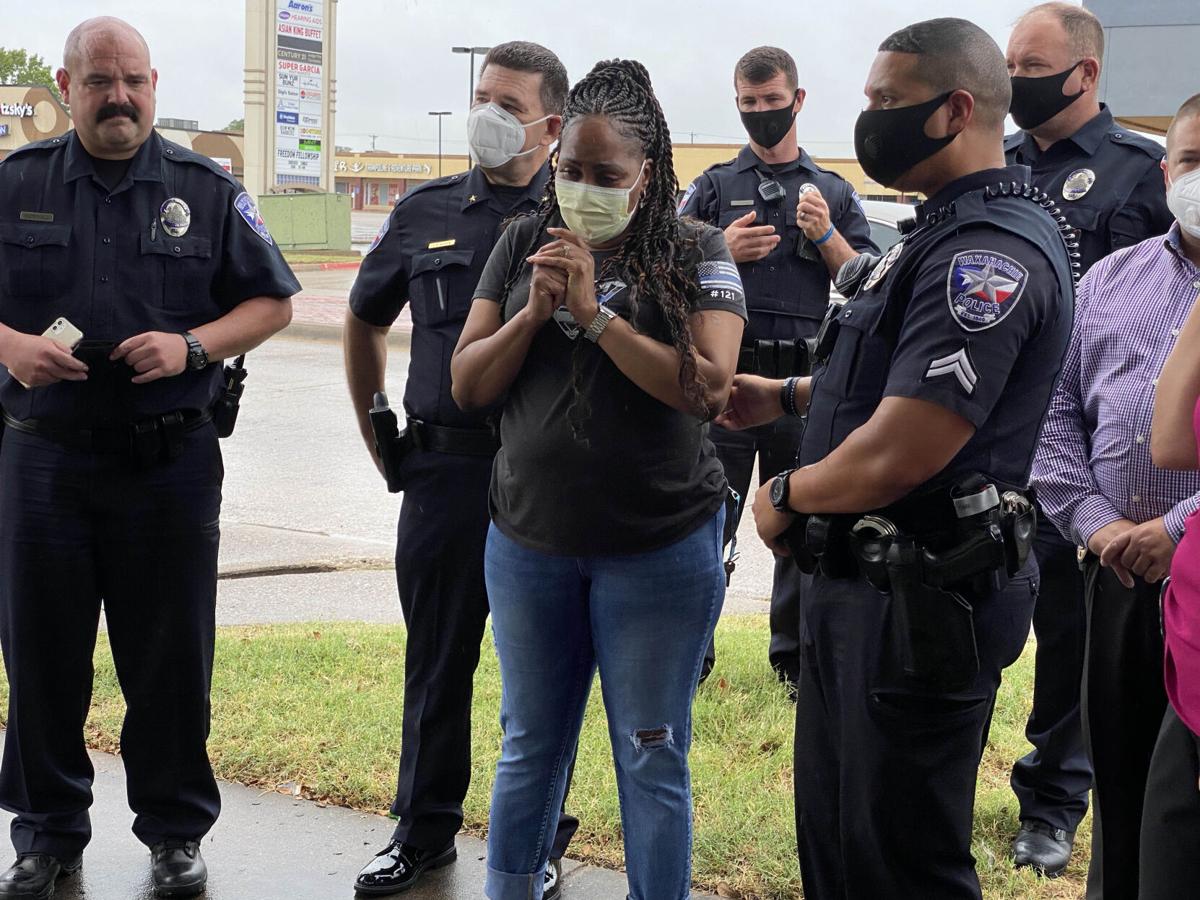 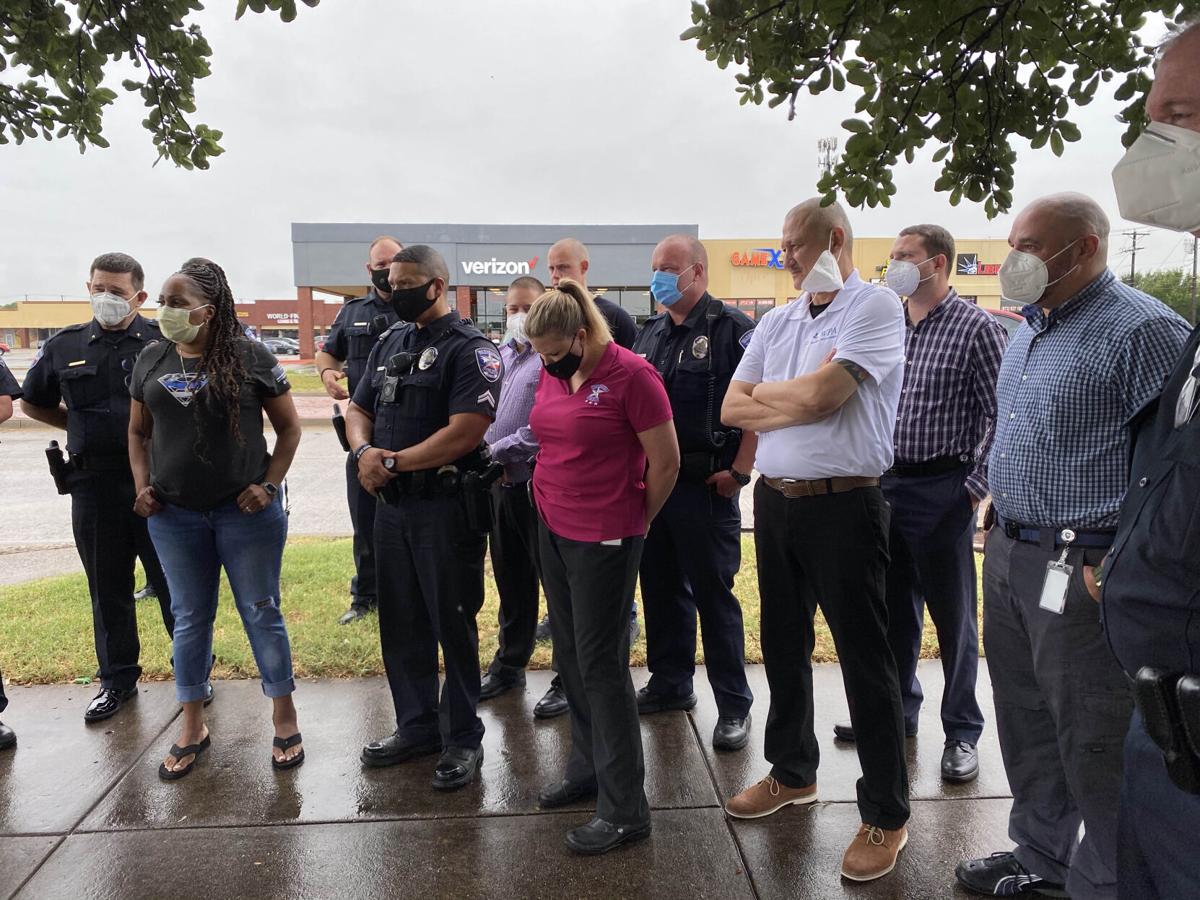 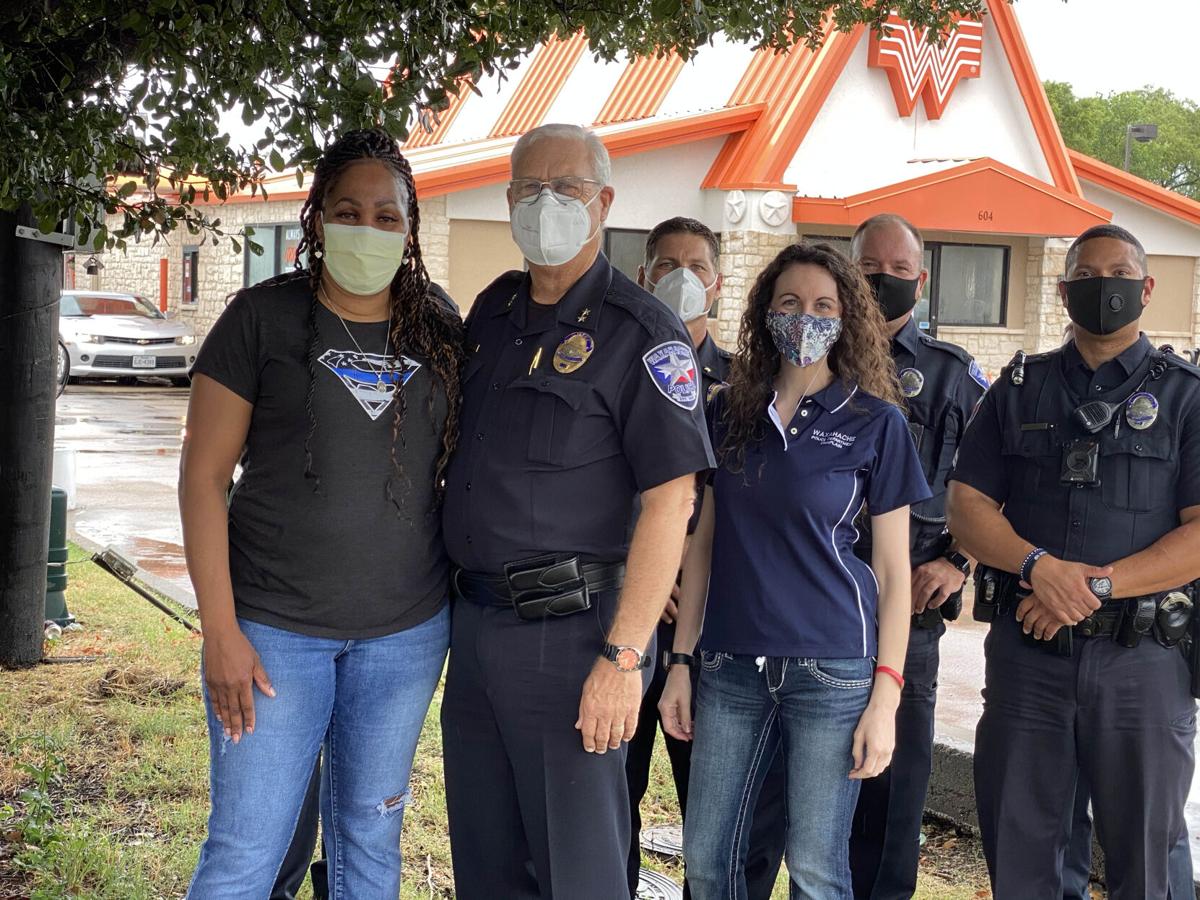 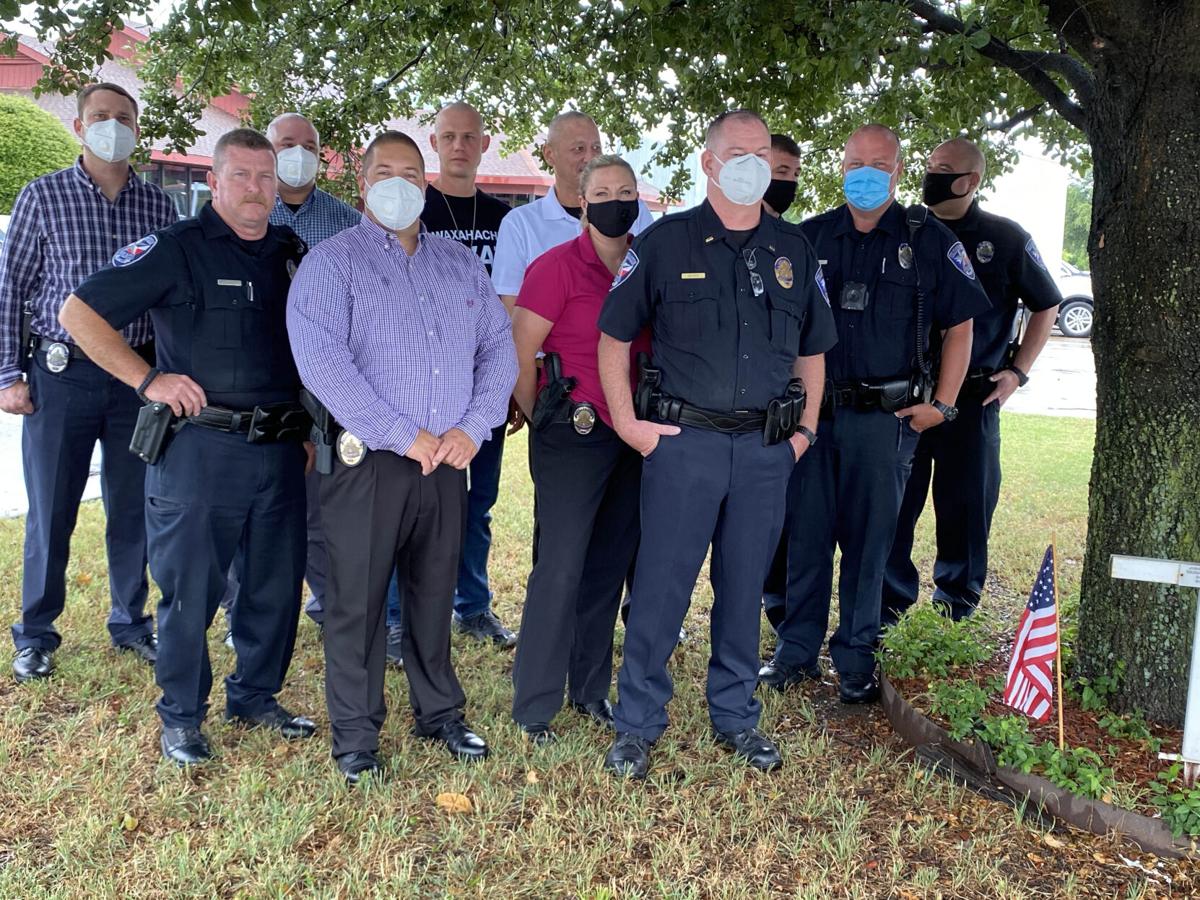 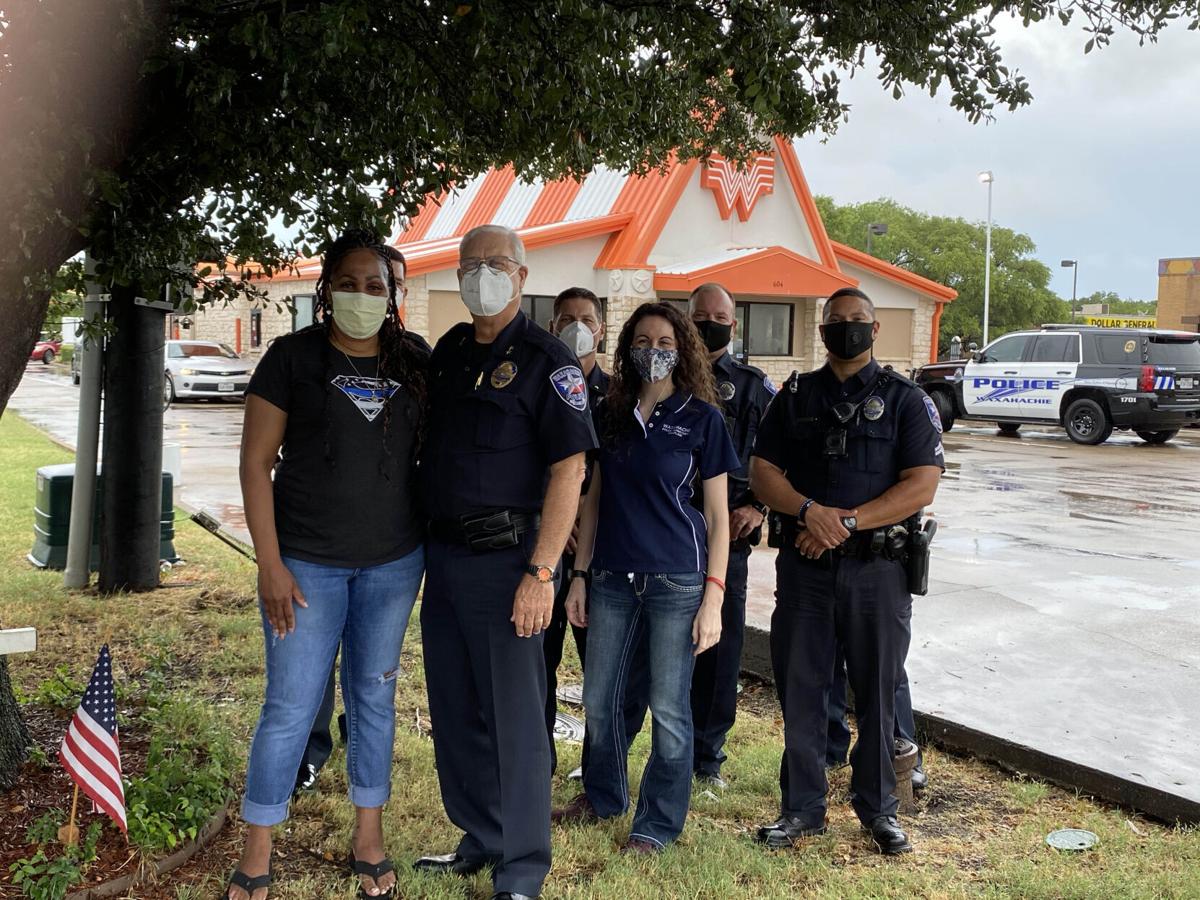 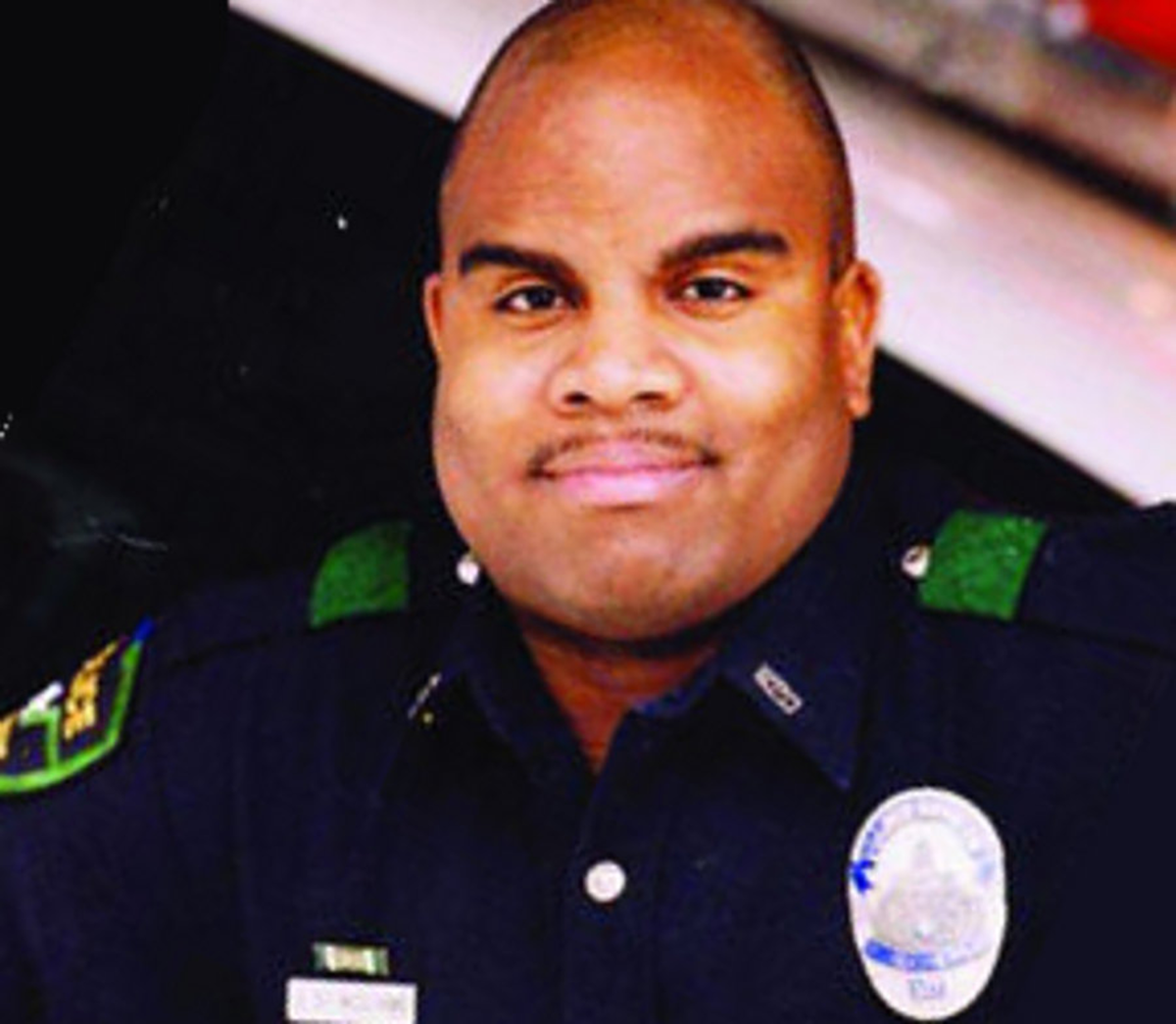 The heavy downpour of rain earlier in the day Tuesday had slowed to barely a sprinkle when members of the Waxahachie Police Department gathered under the tree just a few feet north of the Whataburger on North U.S. Highway 77.

They were there to honor their fallen comrade, patrolman Josh Williams, who was tragically killed on duty eight years ago by a drunken driver.

A 17-year veteran with WPD, the 44-year-old Williams was a field training officer and served on the SWAT team. He was responding to a disturbance call at the fast food establishment when his vehicle was struck by the drunken driver. Williams was transported to Baylor Scott & White Medical Center, where he was pronounced dead, leaving behind his wife, three daughters and other family members.

Marlowe led the group in prayer and, when she finished, Goolsby affirmed to Deanna that she and her daughters would always be a part of the WPD family.

As those at the gathering mingled afterwards, many memories were shared of Williams, who’s described as having had “a million dollar smile with that gold tooth shining brightly.” He was known not only as a prankster around the department but also as a mentor to a number of officers. In particular, he was remembered as having had “a great passion” for his job.

Wiser remembers getting the phone call.

“I immediately went to the hospital but it was too late,” he said. “I will always remember that Josh could dish it out with his pranks, but he could take whatever we did to him in return.”

Sigler recalled how Williams had served as one of his field training officers.

“The way he did the job made an impression on what kind of police officer I wanted to be,” Sigler said. “He was a great guy and he made the job fun. Josh was special to me.”

Williams also had served as an FTO for O.T. Glidewell.

“Josh had a great sense of humor but I got to see the serious side of him when he was my FTO,” Glidewell said. “He pushed me hard to get a lot out of me.

“I had been an officer for four years when Josh died,” he said. “I always looked up to him. He was my mentor and I learned so much from him. Most officers often get burned out in the later years of their career but Josh still loved his job and still had that passion.”

Glidewell described Williams’ death as “the most difficult time ever,” saying how, in particular, those on the scene that night were devastated.

Williams’ photograph hangs in the foyer of the WPD as a remembrance of his legacy and to serve as an example for the young officers to follow.

Deanna Williams shared how she still mourns the loss of her beloved husband but knows also he lives on. She said her 2-year-old grandson knows who his grandfather is.

“He never knew his grandfather but he wears his police cap and points to Josh’s picture and says, ‘That’s my papa,’ ” she said with a smile.

Another grandchild will arrive in September.

Sun contributor Guila Jackson shares: I was blessed to call Josh a friend and will always remember being a few blocks down the street at Race Trac, where I was getting coffee and preparing to deliver papers when I heard the terrible news.