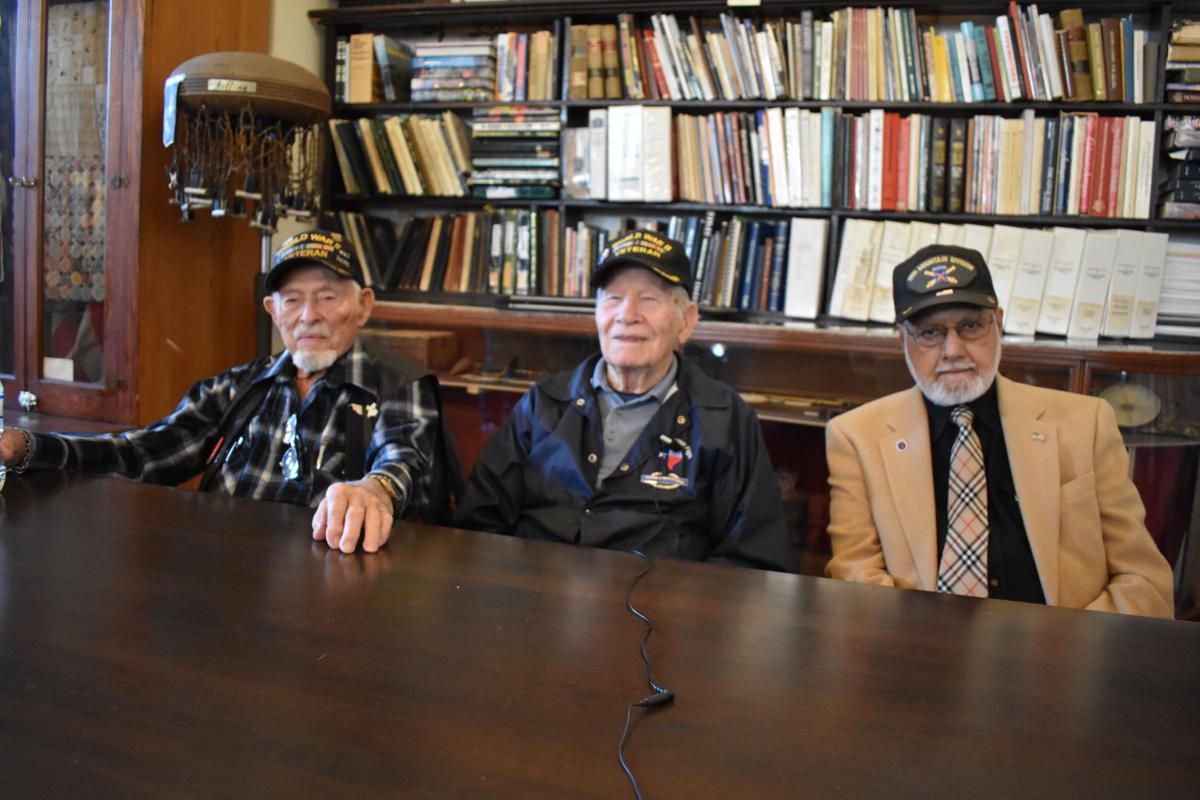 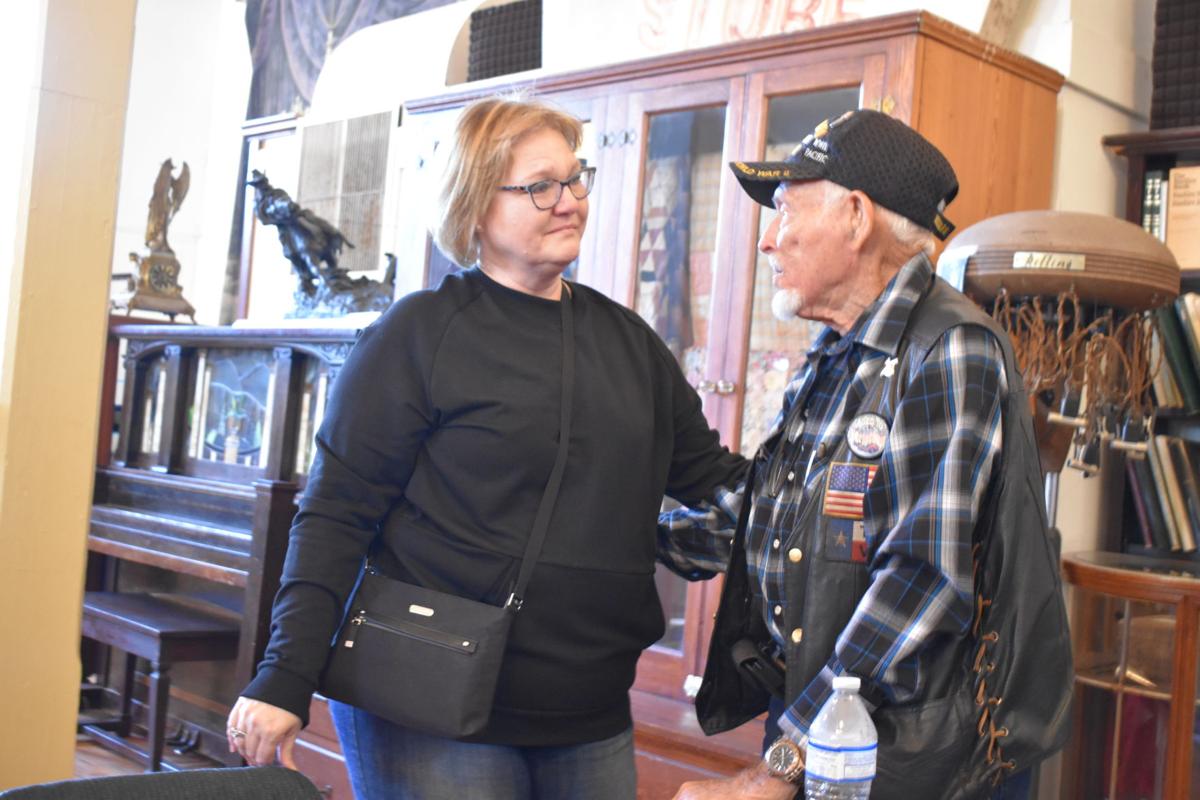 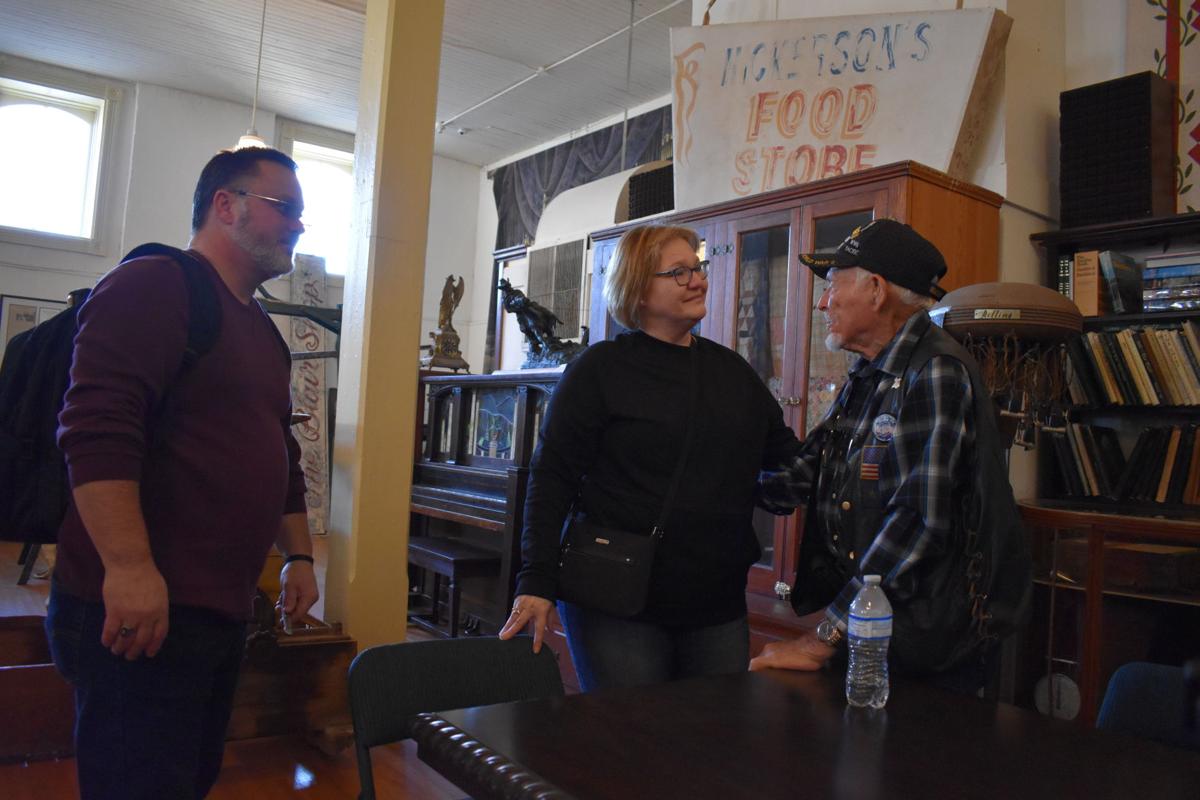 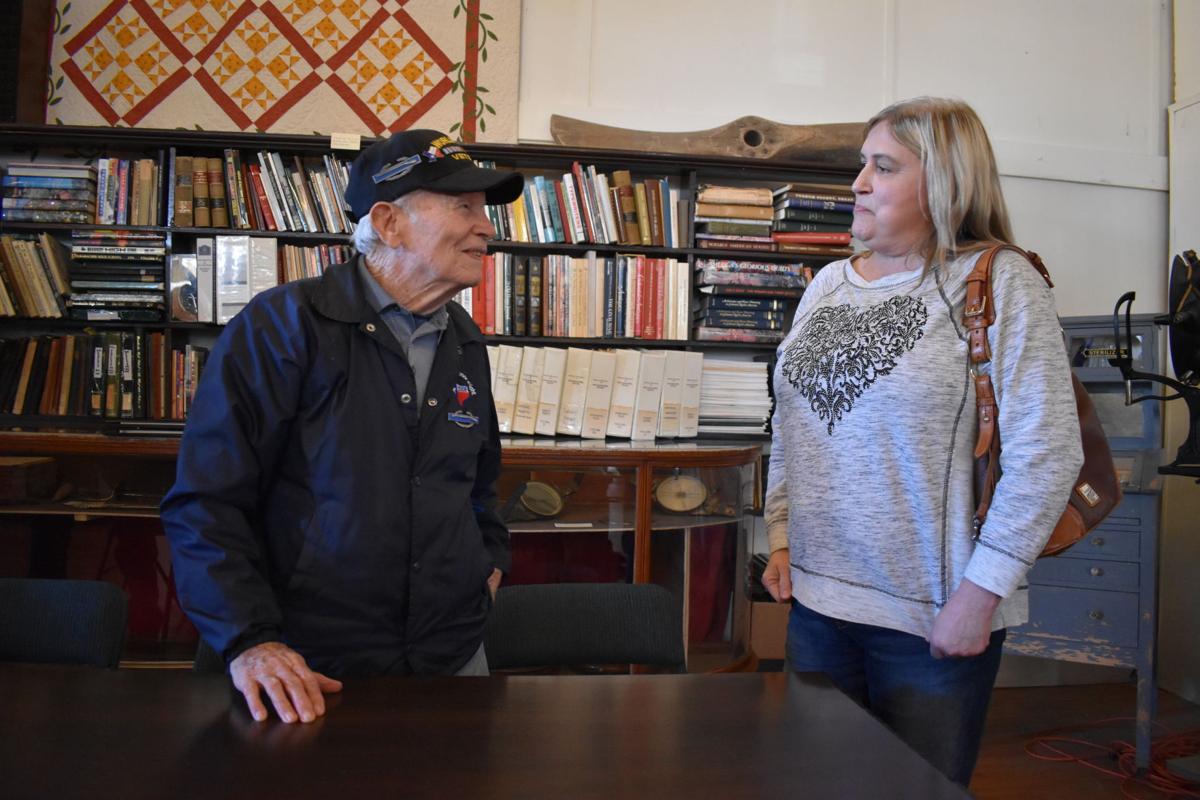 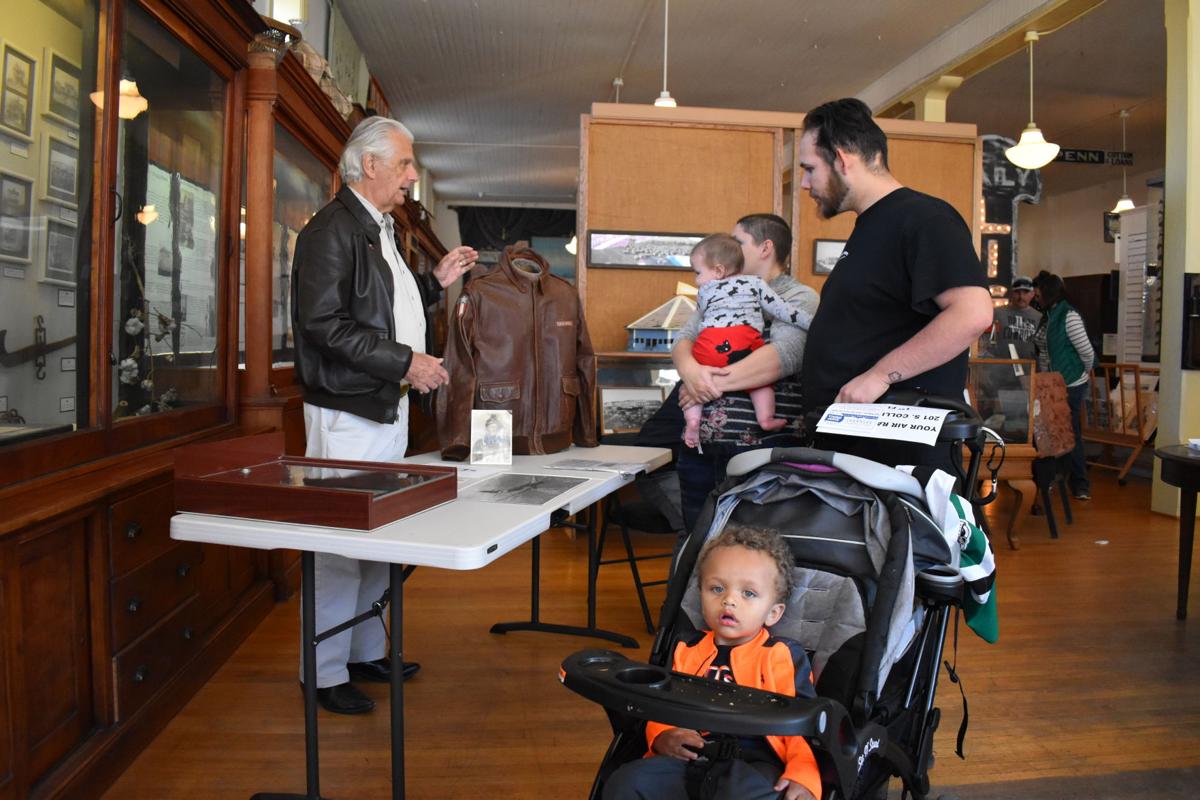 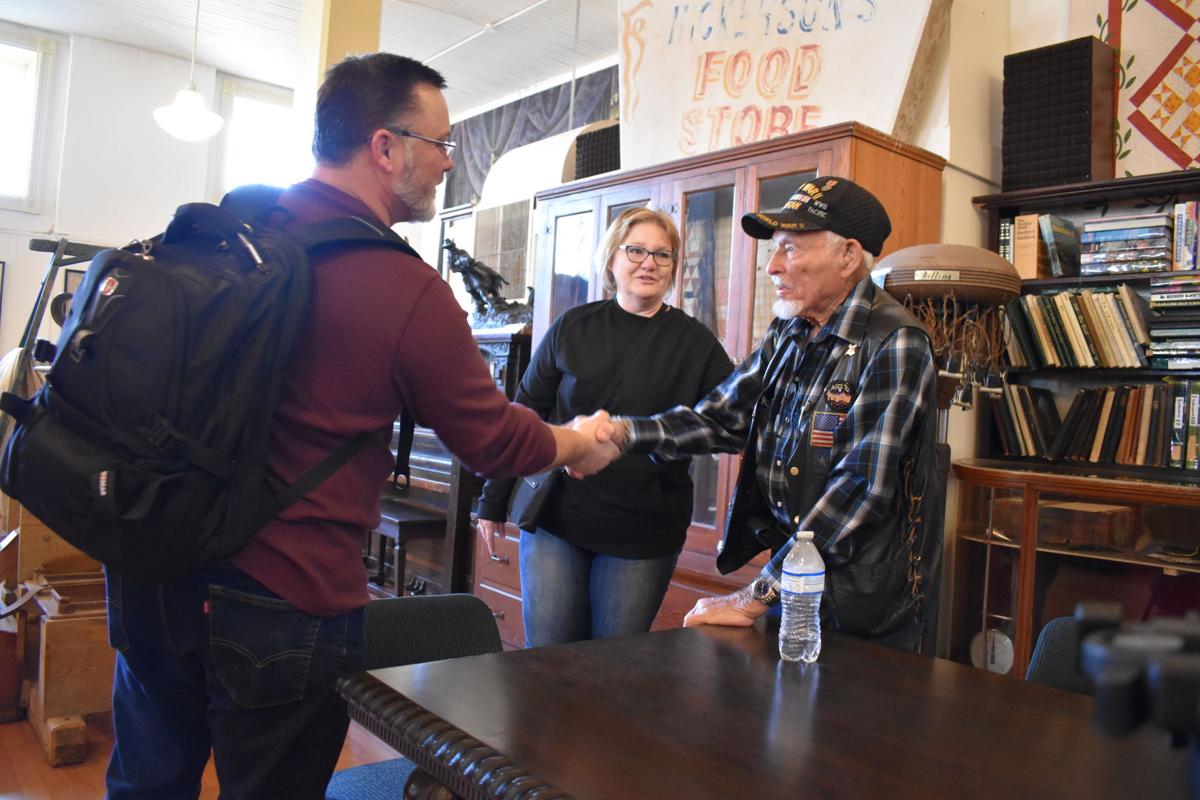 During a special event at the Ellis County Museum on Nov. 9, three veterans talked about the world-changing events and the role they had in them. As each veteran spoke, those on hand for the presentation listened with anticipation.

Waxahachie resident Bob Osborne was a seaman first class gunners’ mate aboard the USS Chester during World War II. The Northampton class cruiser served in the Pacific Theater of operations.

“The USS Chester come around from being repaired from being torpedoed,” he said. “I went aboard and served the next three years on board. On the Chester, I went all over the Pacific. We had three misses (by) torpedoes while I was aboard.”

Osborne served as the primer man on one of the ship’s guns. He would load a blank cartridge that, when activated, would explode and set off gun powder to fire the shell. One incident from a neighboring gun caused Osborn to lose his hearing.

“I was putting everything up in our gear locker from being fired and I hear the guns up there being loaded,” Osborne said. “I stepped out on the deck and, sure enough, they fired No. 2 right over my head and it threw me right on the deck. I couldn’t hear for three days.”

The Chester was one of the ships involved in the Battle of Iwo Jima, which took place from Feb. 19, to March 26, 1945. The Chester bombarded the island to help support the landing of Marines.

“About two or so days before Iwo Jima, we had escorted a ship with frogmen on it. While we bombarded that day, the frogmen surveyed all of the beaches where the troops could land,” Osborne said. “The night before D-day they went back in.”

Osborne shared how, later on in the battle, the ship carrying the frogmen was struck by a Japanese plane after it had attempted to land on airfield taken by the Marines.

“Every ship in the harbor opened up on [the Japanese plane],” Osborne said. “He dove into the ship with the frogmen on it and killed about 26 of them.”

Osborne said the Chester left Iwo Jima for repairs in Saipan two days before the famous flag-raising photo was taken by Joe Rosenthal on Feb. 23, 1945. In Saipan, the crew was told the repairs had to be made back in the United States

On the day Waxahachie resident Charles Atchley turned 18, he volunteered for service in World War II. He completed basic training at Fort Sill in Oklahoma to be an artilleryman on a 105 howitzer. Due to the plentiful number of trained crews in Europe, he was assigned to the 75th Infantry Division. Upon his arrival in Europe, Atchley went to Belgium and took part in the Battle of the Bulge, which was the last major German offensive and took place from Dec. 16, 1944, to Jan. 25, 1945.

“The Germans were trying to come down to Antwerp so they could get to sea,” Atchley said. “Gen. Eisenhower put four divisions together. When the Germans got there, we stopped them. After that, we were right on their tail the rest of the time.

““They would go into a little place and bring the Tiger tanks out and we would come back,” he said. “During the night, they would go to the next town. At 5 o’clock in the morning, we would jump off again.”

Atchley said soldiers lacked proper cold-weather equipment and, at one point, his feet froze. He later learned it was the coldest winter Belgium had experienced in the last 50 years.

“When that was over with, we went down to Colmar in southern France,” Atchley said. “We went down there, the 75th Division that I was in and the third division that Audie Murphy was in, along with the 24th or 42nd Division and we ran them out of Colmar. By then, winter was up.”

Atchley was later issued large rubber boots that caused blisters to form on his feet and led to his discharge from the military. Before he went to the hospital, he was awarded the combat infantry badge on his 19th birthday. He was also awarded two bronze stars along with the Legion of Honor by the French government in 2013.

Service during the Cold War

Waxahachie resident Joginder Bhore served just after the Korean War and during the Cold War.  He came to the United States from India to attend college. Upon graduation, he decided to stay and thought joining the Army would be a good way to help get citizenship so he volunteered for the service. Bhore served about two years in Germany with the 10th Mountain Division and then another five and a half years in the active reserves in the 187th Infantry Combat Brigade.

“They called it the Cold War but, at times, it got pretty warm,” Bhore said. “It was during the Hungarian Revolution in 1955-1956 that they activated us. Didn’t fire any shots but we were right there.”

During his time in the military, Bhore was involved in several high-risk operations.

“We used to sneak into East Germany, clandestine, with no ID and nothing American on you,” he said. “If you got captured, they didn’t know you. That was a voluntary thing and I volunteered three times.

“If the Russians were to attack, they would have to go through East Germany into West Germany,” he said. “They would drop us off to see what routes they would take to attack West Germany so we would make maps. That is what we used to do. That was our mission.”

There were a few close calls as they carried out their mapping missions, he said.

“One of our guys, who had just made sergeant, (was with us) as we were going through this restricted area where there were wires and you had to crawl underneath,” Bhore said. “It was very cramped and caused him to put his butt up in the air – and he got shot. Two of us had to drag him across.”

Ellis County Museum board member John Hamilton, who served in the U.S. Army, said Veterans Day is important so as to recognize everyone who has served. He noted that each person’s service contributes to the lasting freedom enjoyed by all today.

Hamilton encourages everyone to stop by the museum to find out more about local history and the people who’ve played a part in it.

During an event Saturday, Nov. 9, 2019, at the Ellis County Museum in Waxahachie, U.S. veteran Charles Atchley shared stories from his militar…