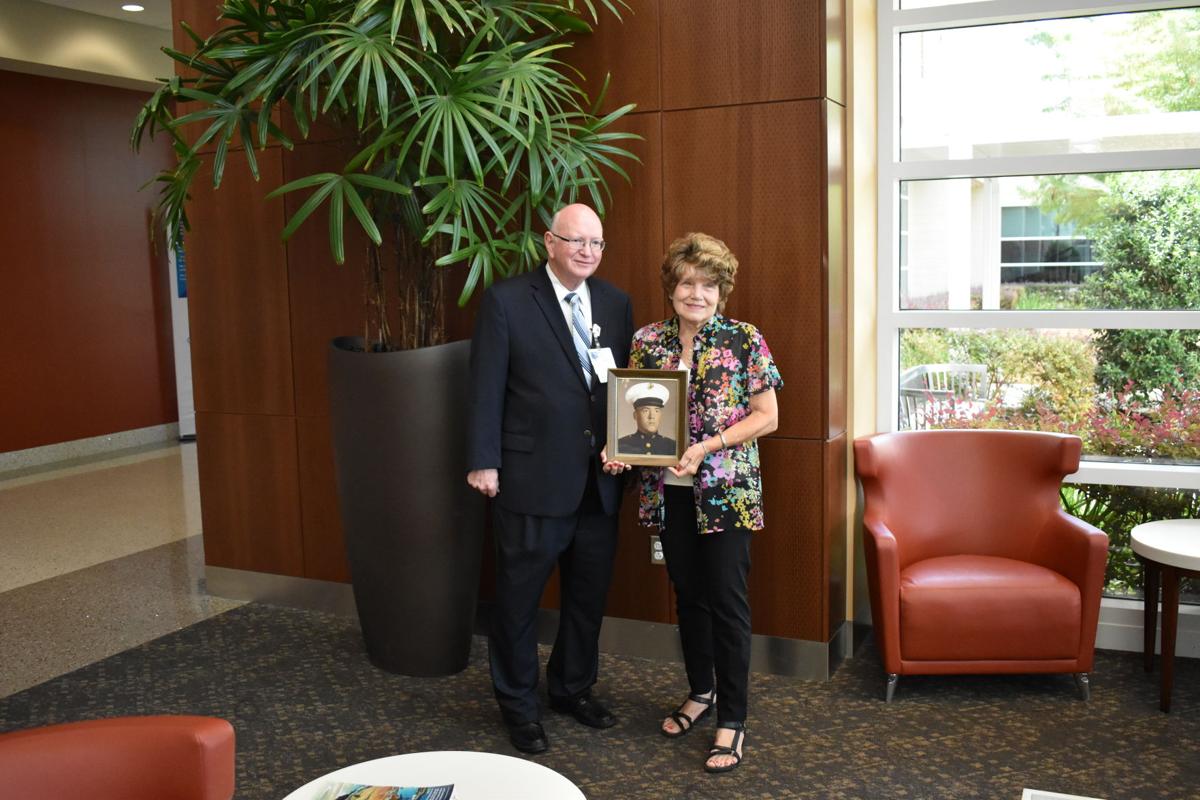 Baylor Scott and White Medical Center Waxahachie Chaplain Jerry Carter stands next to Chrystyna Reymann holding a photo of her late husband Gordon “Pat” Coughlin Jr., who was a Marine veteran honored by the hospital through a program called Code Honor. 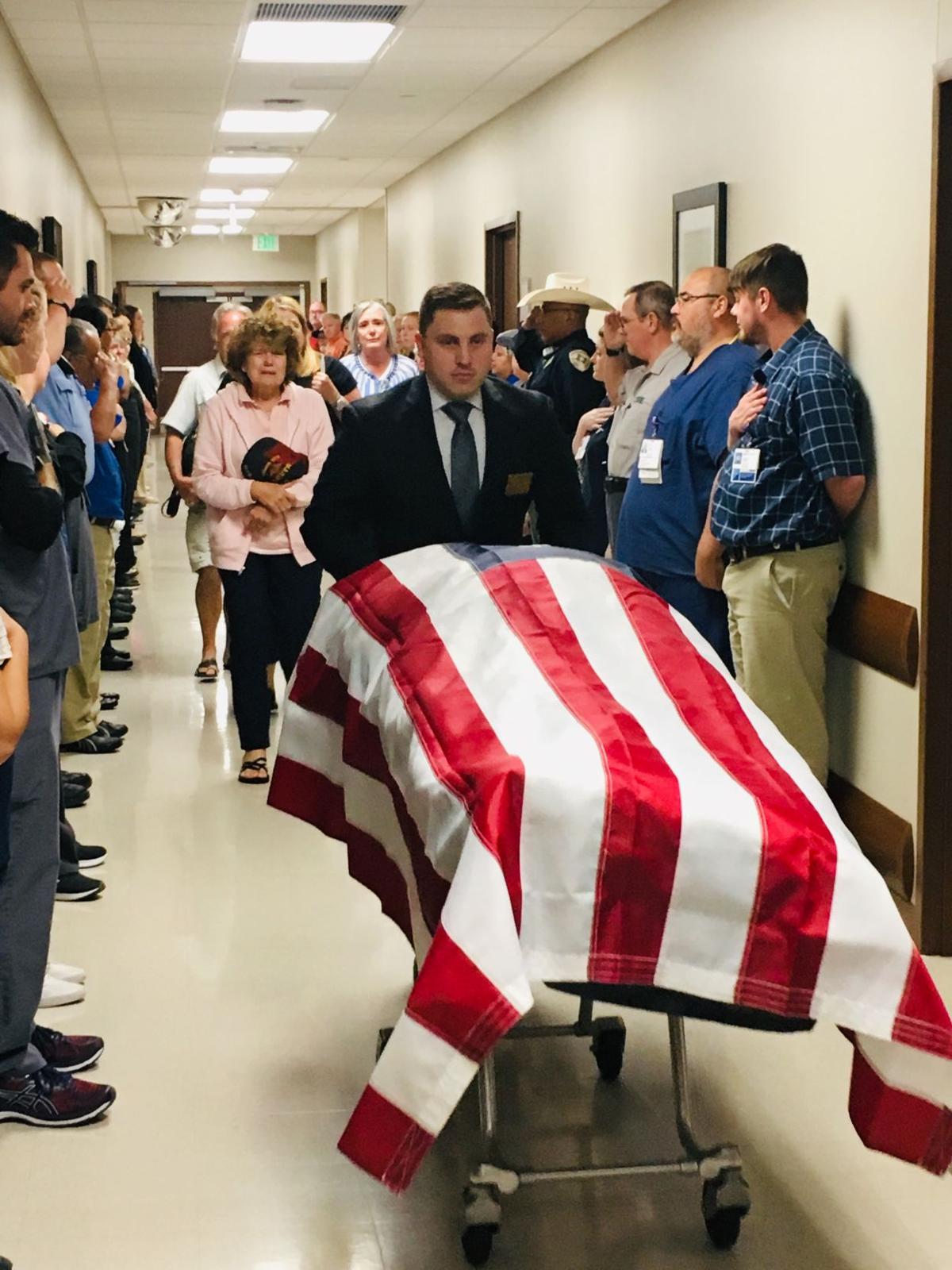 Baylor Scott and White Medical Center Waxahachie Chaplain Jerry Carter stands next to Chrystyna Reymann holding a photo of her late husband Gordon “Pat” Coughlin Jr., who was a Marine veteran honored by the hospital through a program called Code Honor.

As the gurney rolls down the hallway, staff members at Baylor Scott & White Medical Center –Waxahachie stand silently, with their hands over their heart or in a salute to honor the life of a veteran who has just passed away.

The hospital has given this tribute to 28 veterans in a practice that has become known as Code Honor.

Hospital chaplain Jerry Carter said the idea for Code Honor came about after a clinical manager had seen a video of a similar practice happening at another medical facility and thought it would be good to put into practice at the Waxahachie hospital.

“When we do have a veteran pass away, our protocol is that we will announce overhead something to the effect, ‘It is our privilege today to observe Code Honor in respect of a deceased veteran,’ ” Carter said. “We invite the staff to join us in respectful honor in the hallway between the service elevator and back dock.

“Then we have our veterans (on staff) drape the funeral home stretcher with an American flag,” he said. “The veterans take this seriously as they drape the flag and then we escort the body out of the hospital. Before we put the body into the hearse, the veterans fold the flag and give it to the family members.”

Carter said the hospital has about 60 veterans on staff. They have purchased white gloves to use while folding the flag and wear vests that designate them as part of the honor guard to formalize the ceremony even more.

“It is done with a great deal of dignity,” Carter said. “The veterans are very involved in this; they want to show their respect. The atmosphere is quiet and solemn. I have had people tell me when that flag-draped stretcher goes down that hallway, they get a lump in their throat from just the experience of honoring one of our veterans.

“To me, to be involved in this is just one way of being able to say thank you to the people that have sacrificed and served our country,” he said. “I never was in the military and I highly respect those who have given their lives and, in some cases, limbs. They have sacrificed to serve our country to make sure we have the freedom to do the things that we do here. If it was not for the sacrifice of our veterans, we would not be here today.”

For Army veteran Chrystyna Reymann, Code Honor provided comfort upon her seeing so many people pay their respects to her husband, Gordon “Pat” Coughlin Jr. Coughlin was a Marine veteran and passed away July 8 after a long battle with diabetes.

Reymann said it meant everything to Coughlin to be a Marine and that his time in the service was something he always treasured.

“He was the proudest Marine,” she said. “He talked about how wonderful it was and how proud he was of his service. How he wished he could have continued. I was proud too of my service. I don’t have an army hat but he always wore his Marine air wing hat. He would Semper Fi everyone.”

Reymann said their relationship was unique because of their shared service in the military.

“We met in 1965,” she said. “This a long love story. We dated through college. I was at TWU and he was at North Texas State. Both of us went into the military. I was in the Army Nurse Corps and he went into the Marines. He went to work on helicopter electronics and I was an army nurse stationed at Fort Dix.

During Reymann’s service as an army nurse, she would take care of soldiers returning from overseas deployment. After leaving the Army, she worked in several Veterans Administration’s hospitals with a combined military and federal service three months shy of 40 years.

Reymann described Coughlin as a person with a big personality who was a big talker, loved to tell jokes and was very respectful and caring. After leaving the service, Coughlin ran his own insurance company and served as a substitute teacher in Red Oak.

Reymann said she’s grateful for the Baylor Scott & White staff for not only their professionalism but the personal care they gave to Coughlin over the years. She noted the respectful mood of everyone helped give her comfort after he passed away.

“To see all of those people it was like wow,” she said. “It was just unbelievable. I was uplifted and proud at the same time knowing how proud he would be to have all of the respect. He was loved by everybody.”