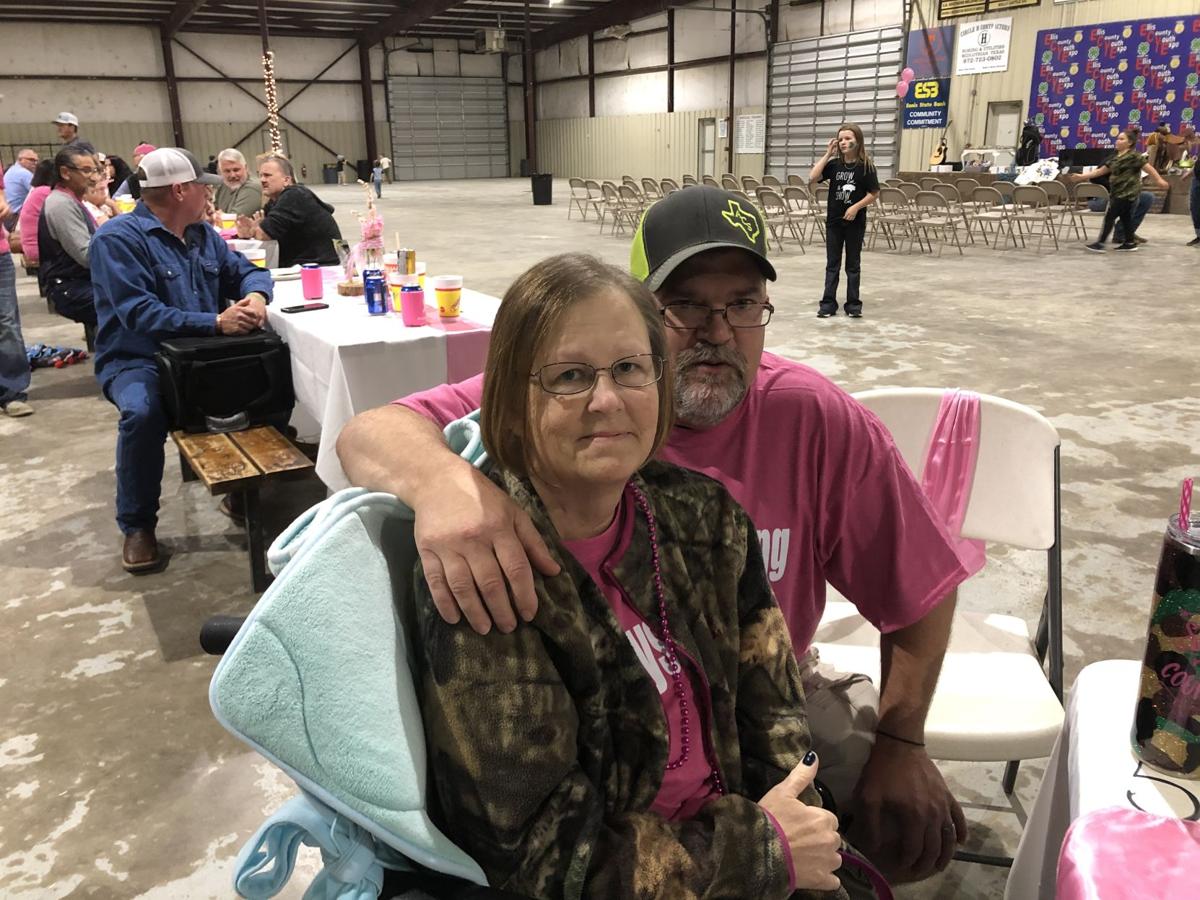 Becky and Clay Sigler at Saturday evening’s benefit that was put together by friends and family as a show of support for Becky in her fight against cancer. 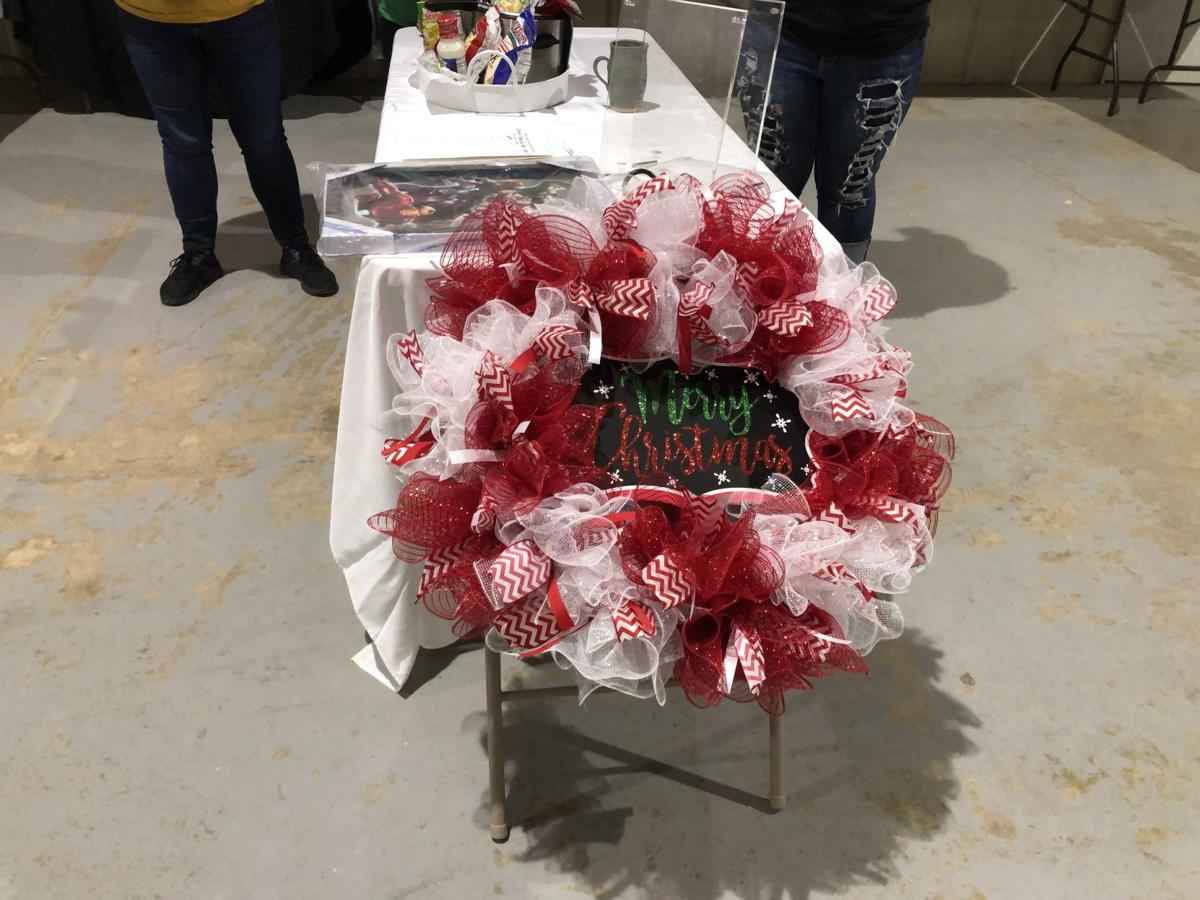 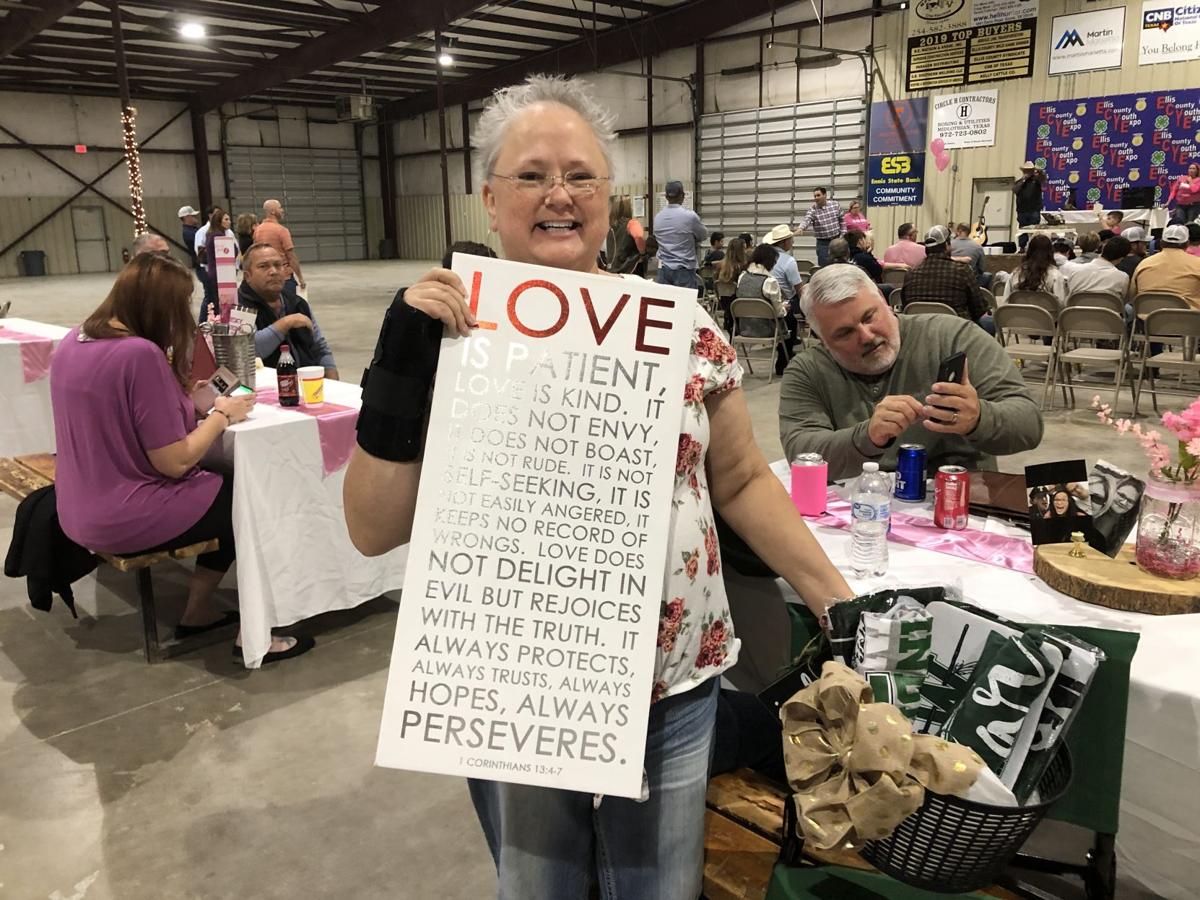 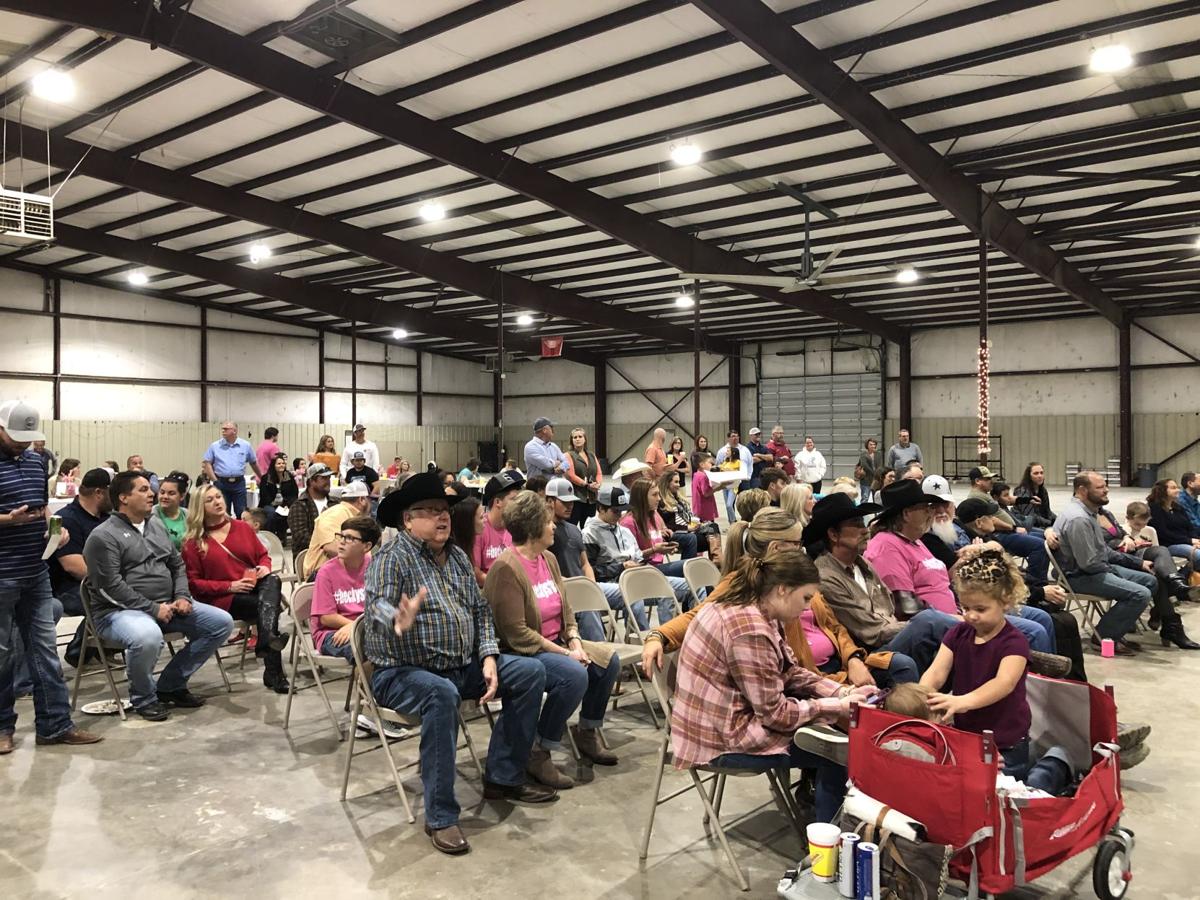 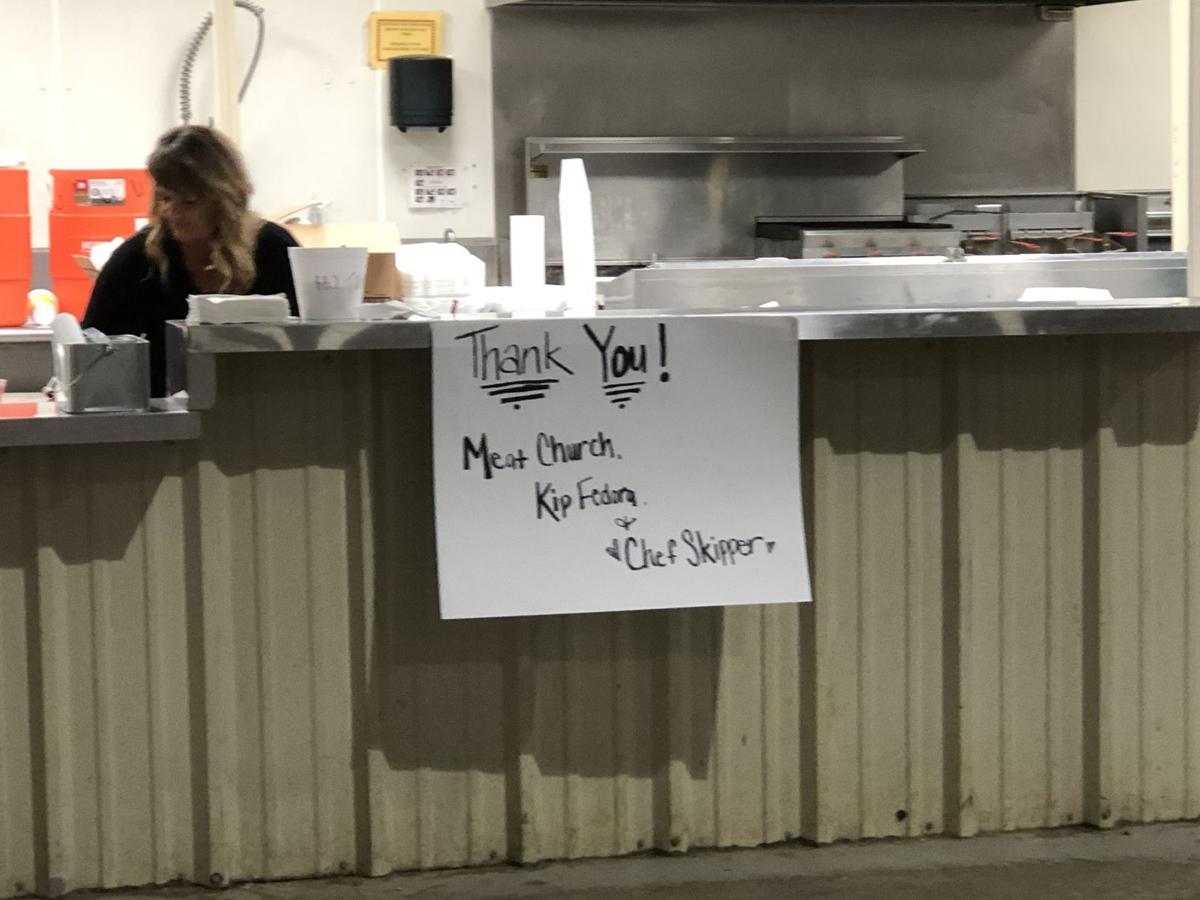 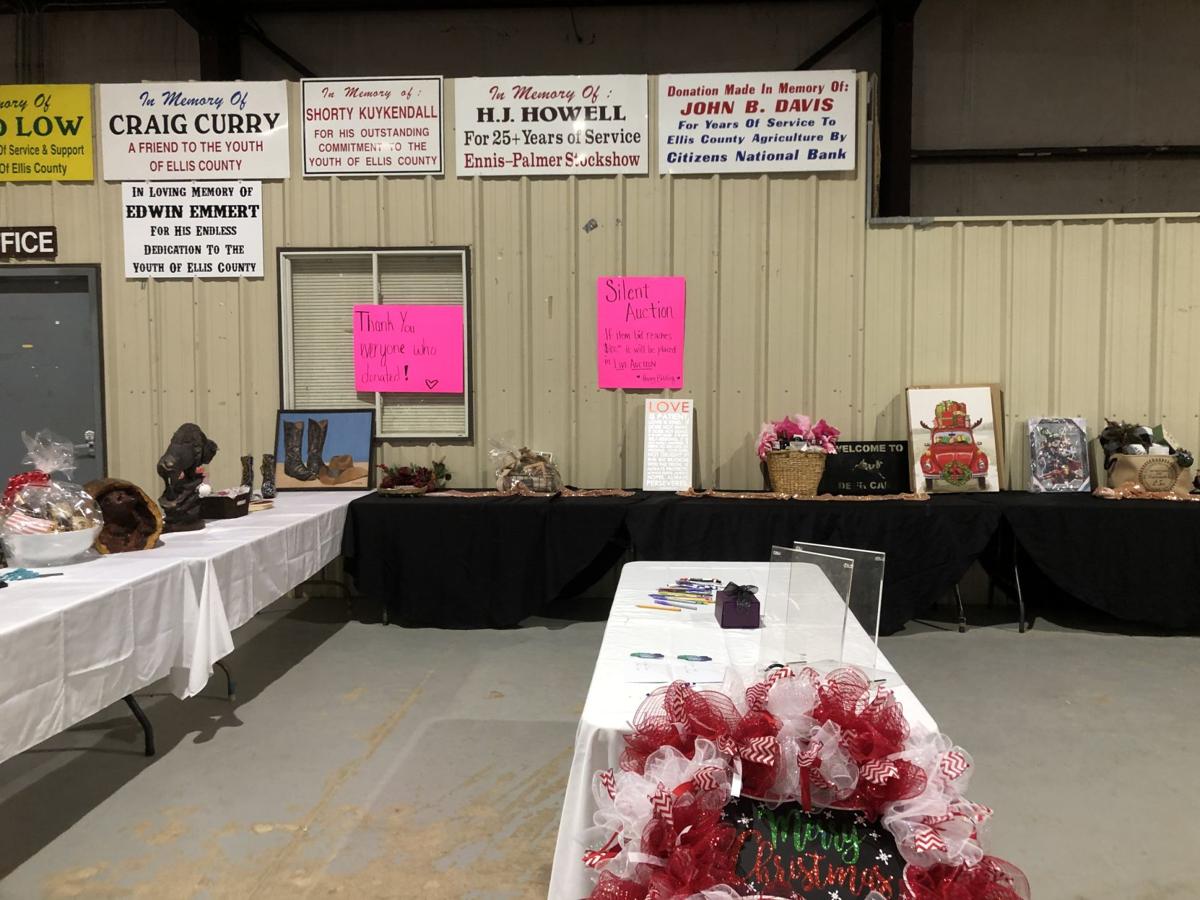 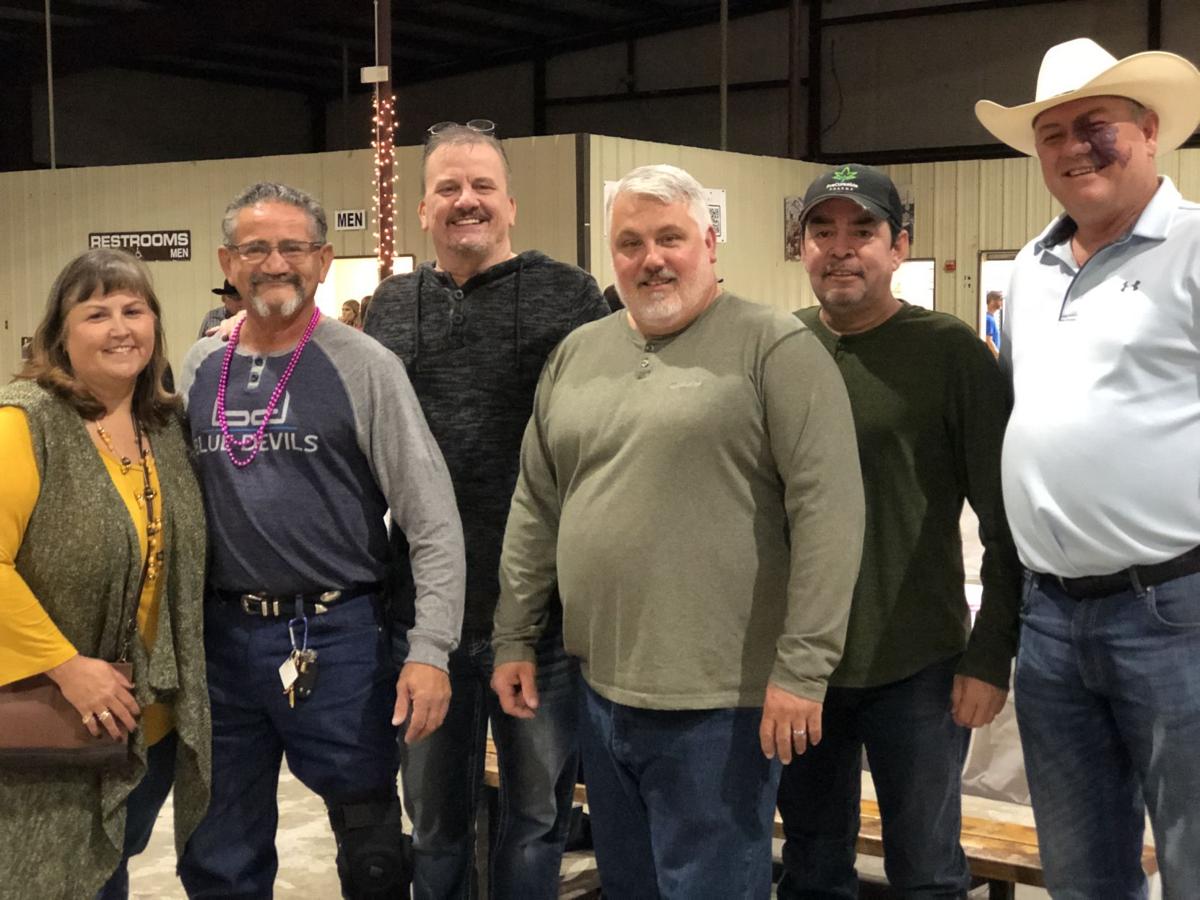 Becky and Clay Sigler at Saturday evening’s benefit that was put together by friends and family as a show of support for Becky in her fight against cancer.

The Galatians 6:2 (KJV) Bible verse, “Bear ye one another’s burdens, and so fulfill the law of Christ,” was a reality Saturday night at a benefit for Waxahachie resident Becky Sigler, who was diagnosed in March with breast cancer.

The turnout at the Ellis County Expo Center was tremendous, in spite of a venue change in the last few days leading up to the event. A field of pink was observed through the building as many who attended bought the pink shirts emblazoned with #BECKYSTRONG across the front.

As the Sun visited with Becky, she was both overwhelmed and pleased by the community’s support of her family financially and lovingly during this difficult time for the Sigler family. The event saw her surrounded by her children, grandchildren and friends, all of who constantly showed their love for her.

Becky shared how, in addition to being diagnosed with breast cancer, she’s been told she needs triple bypass surgery. And, due to a fall, spinal surgery was needed in June, which has resulted in her being in a wheelchair.

Now, after having undergone 10 rounds of radiation and the spinal surgery, Becky expects to begin chemotherapy and have an echocardiogram soon.

In spite of the cascade of medical issues, Becky displays a great attitude.

“I cannot believe there are so many people here,” she said, with tears in her eyes and a smile on her face. “I am so thankful for them being here. I wish I was able to go up to each one and thank them for supporting me.”

Becky spoke fondly of her family with the Sun and noted how the challenges have affected them.

“It has been hard on them,” she said, noting, “It’s difficult for the younger ones. I think they may just not know what to say.”

A conversation with Clay revealed a man who has a strong faith in God.

“I’m holding up good because I have faith,” Clay shared with the Sun. “I know God has a plan for this. I’ve been able to work only three days since Becky was diagnosed because I take care of her every day. We didn’t know how we were going to make it. God has supplied everything we need.”

A strong believer in the power of prayer, he asks that everyone continue to pray for Becky and their family.

Supporters at the Expo included members of her graduating class of 1984, with Chuck Sullins, Carrie and Lee Lewis, Oscar Ortiz, Joey Garcia and Danny Grier all in agreement they were in attendance to support their classmate.

“We take care of our own,” one of them commented as the others nodded. It was a comment repeated many times during the night.

“I hope we raise lots money tonight,” said Kim Kriegel, who attended with her husband, Dale.

“Every bit of the planning for this was done by text, phone calls and Facebook,” Jill Sigler said, noting she was pleased with the event’s success.

Those wishing to make a donation to help the Becky and Clay Sigler family can still do so to the Becky Sigler Benefit account, which has been set up at Citizens National Bank. Donations can be made at any branch.