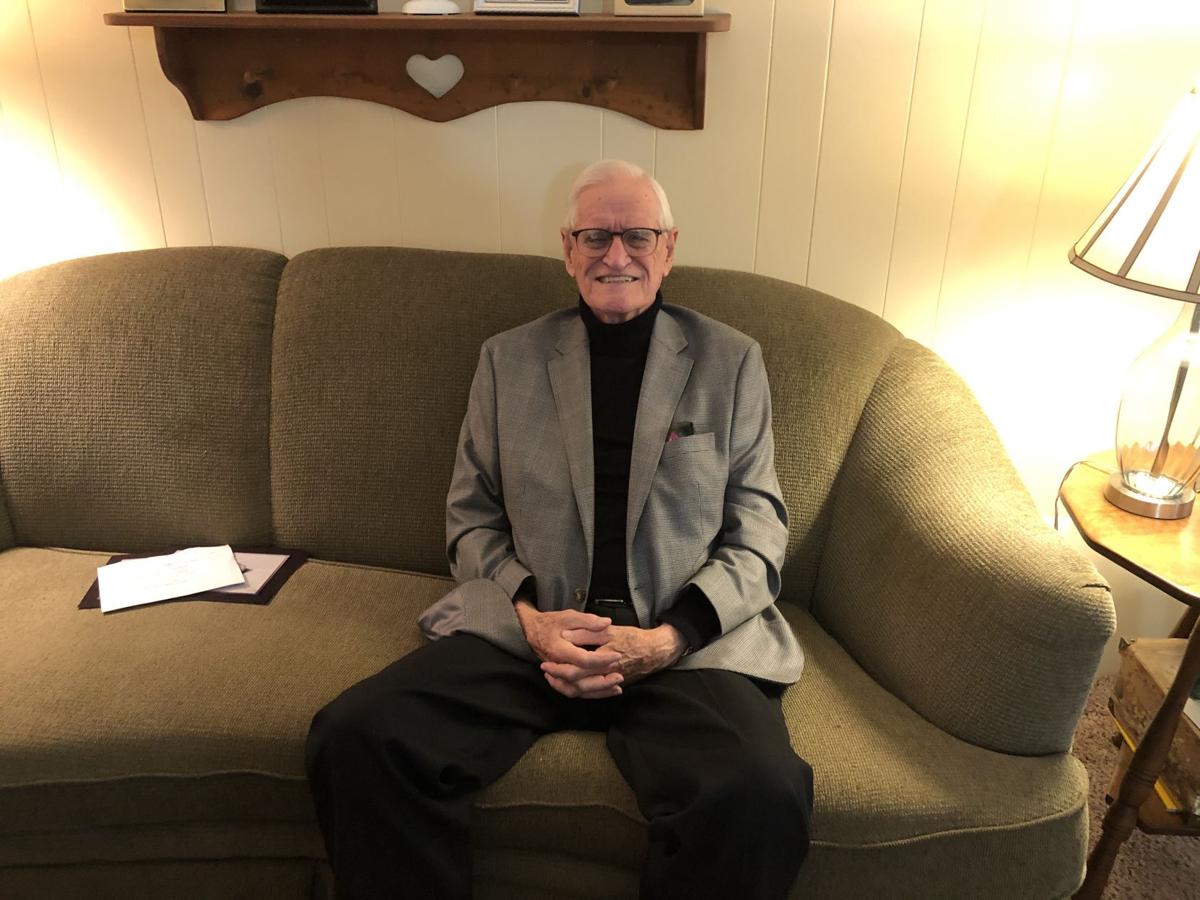 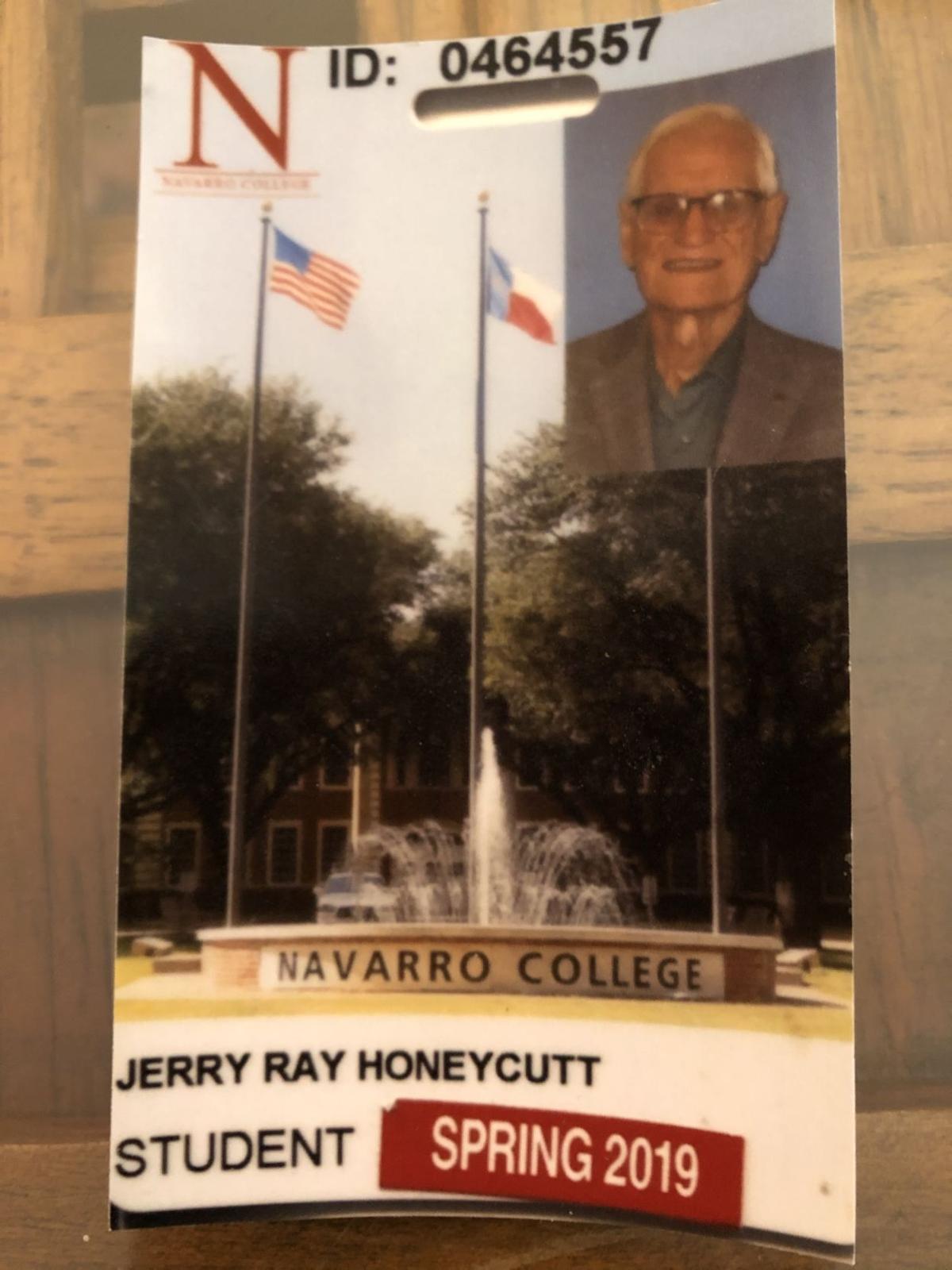 The Waxahachie Sun recently caught up with Red Oak resident Gerald Ray Honeycutt, who’s making quite the name for himself at Navarro College, where he’s taking – and passing – college courses at the age of 83.

Honeycutt has found that the courses are one way he’s able to keep himself busy since the love of his life passed away after an eight-year illness in February this year.

His emotions are obvious as he speaks of his late wife, Robin, whom he lovingly cared for until the end.

“I cooked for her and cared for her during her illness,” Honeycutt shared with the Sun. “I miss her very much.”

The two married in 1957 and were together 61 years, eight months.

“Robin was a loving person,” Honeycutt said. “She loved animals and was dedicated to me and our three sons, David, Marty and Jeff. She dearly loved our four grandchildren and eight great-grandchildren.”

He shared with the Sun how devastated he was when she passed away.

“I was very lonely without my wife and I became depressed and wouldn’t leave the house,” Honeycutt said. “My son-in-law visited me and told me this wasn’t like me and that I needed to do something.”

Honeycutt took that advice to heart and decided he would take some college courses.

“I had always regretted not getting more education because I was so active in sports,” he said. “I was denied the first time I tried to enroll (at Navarro) because I was not computer literate and didn’t have a computer. My friend, Stuart Lazarus, talked the college into giving me my tests orally.

“I became a student at the age of 83 and I took American History 1 and 2 and Texas History,” Honeycutt said. “I passed the courses with no problems. I plan on taking a computer class next.”

Honeycutt was born in Dallas in 1936 and attended Adamson High School, where he ran track and competed in the shot put, discus and javelin, and whose age group won the state championship in free throw competition before graduating in 1954.

He attended North Texas University for one year after high school. While at college, he was a member of the Air Force ROTC drill team, which marched in the Mardi Gras in New Orleans and opened the Texas State Fair.

“Marching in the Mardi Gras was very exciting for an 18-year-old,” he said.

Honeycutt shared the way he met his wife, while proudly showing a photo of his wife from when she was a student at South Oak Cliff High School.

“Her family and my family attended the same church,” he said, noting that Robin had a boyfriend at that time who was a student at the then all-male Texas A&M University. “The boyfriend submitted this picture to the school for the homecoming queen competition. She was chosen as one of the top five finalists.”

Although Honeycutt was rejected the first time he asked Robin out on a date, he was successful the second time around.

“She overwhelmed me. The first time I kissed her, I knew I had to make it my best kiss ever,” he said, smiling as he shared that the kiss must have been successful because she told him she loved him.

After Robin graduated from high school, the two became engaged and were married in 1957. Honeycutt was drafted to go into the military in 1958 and served in the Army National Guard for six years.

“When I was drafted, our country was not engaged in war and we had one child so I didn’t have to go,” he stated.

Throughout his life, Honeycutt has loved being outdoors and active in sports. At one point, his athletic abilities saw him hired by Titche’s Department Store in Dallas to play softball.

“We were an Elite Softball team and we played all over the country,” said Honeycutt, who also boxed for the Dallas Athletic Club as a 191-pounder in the heavyweight division, posting a 10-1 career record.

During his younger years, Honeycutt coached Pee Wee football and basketball for the American Legion; in his later years, he played softball for 13 years with the DeSoto Dukes.

“I played softball until I was 79 years old,” he said. “Originally, I was the catcher but I eventually played the outfield because the catcher position is hard on the body.”

He does say that, prior to falling in love with his wife, he may have been a “player” in high school.

“I loved the girls and they loved me but the boys hated me,” he said. “I would introduce myself to the girls by saying, ‘Hi, I’m Jerry Honeycutt and I’m really into you. Why don’t we make my name short and take out the “cutt” and you just call me ‘Honey,’ ” he shared while showing the Sun his high school yearbooks, each of which featured a number of notes written to “Honey.”

It all changed, however, once Robin entered his life. That love remained strong and steadfast across the decades.

As an insurance salesman for Prudential Insurance Company and Transport Insurance Company, Honeycutt said he won several contests and was rewarded with trips to Hawaii, Virgin Islands, Disneyland and other places to take his family. He took both his business and his family seriously.

“Many of the agents would go for a drink after work and would invite me,” he said. “I refused to party with them. I told them I had a pretty wife at home and it was not worth sacrificing my family to party. I never went with them.”

Besides taking college courses to keep himself busy since his wife’s passing, Honeycutt said he spends some of his free time at the Waxahachie Senior Activity Center. He’s also an active member of First United Methodist Church in Waxahachie and recently purchased 30 red roses from Eubank Florist. That Sunday, as the women in his Sunday school class entered the room, he handed each a red rose.

When everyone was seated he said he went to the front of the class to speak, saying, “I always gave Robin, my wife, roses and, since she is no longer with me, I don’t have anyone to give roses to now, so I wanted to give you ladies a rose in memory of my loving wife.”