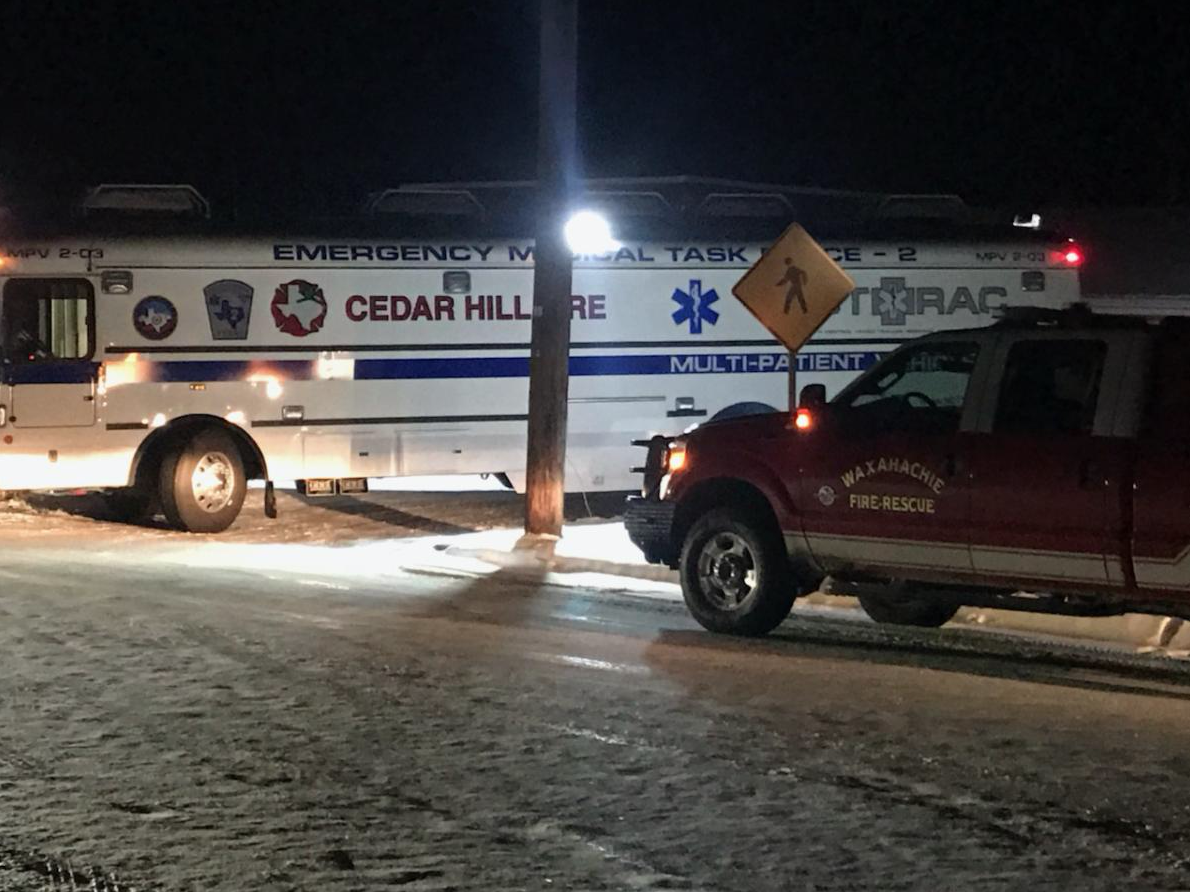 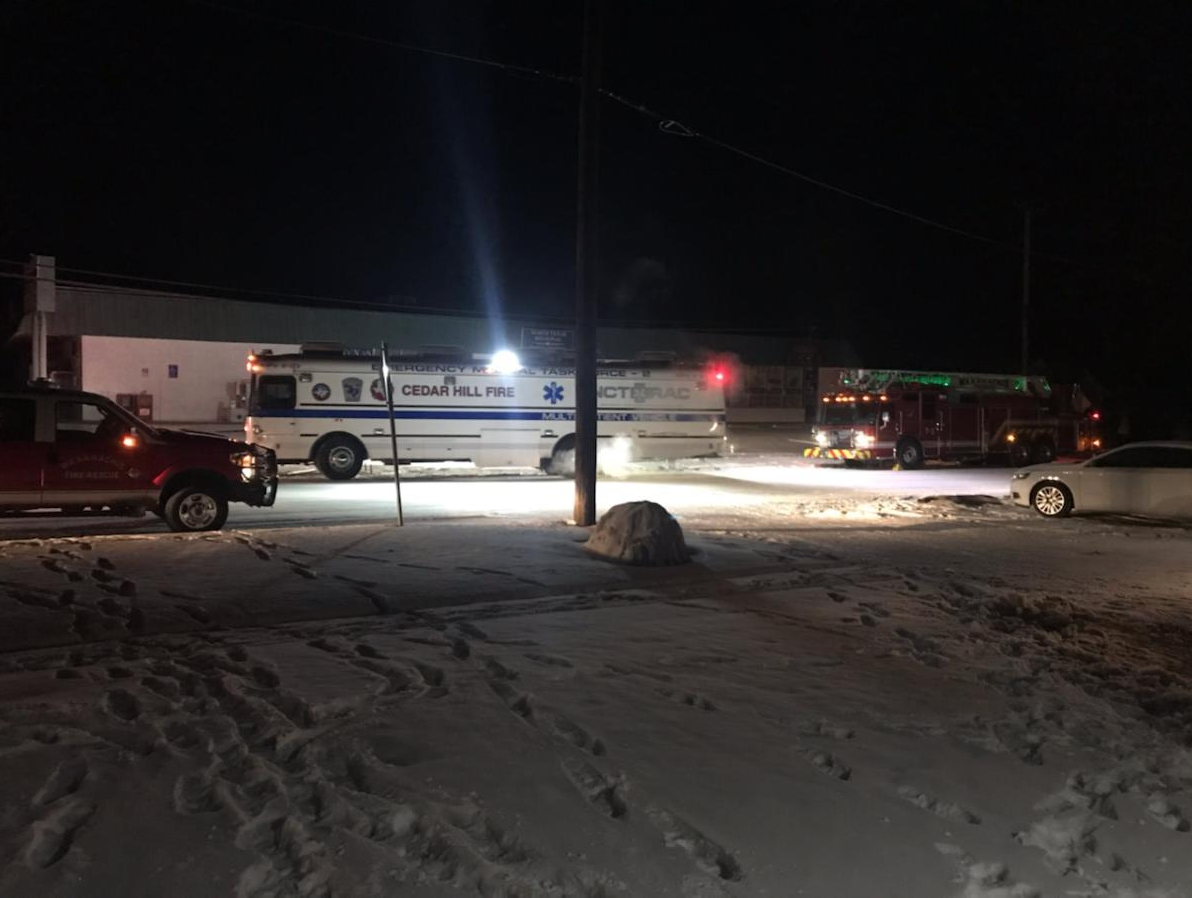 First responders from across the area and Waxahachie ISD employees worked together to facilitate the evacuation of residents from Focused Care nursing home Monday night.

Fifty residents were taken to Baylor Scott & White Medical Center – Waxahachie and 12 were taken to area facilities. The National Weather Service reported temperatures of 14 degrees Fahrenheit at the time.

Focused Care had had intermittent power throughout the day and since the weather was getting worse, the facility’s administration made the call to evacuate residents.

Moon said the AmBus had finished up its second deployment of the day in the Dallas area before making the trip to Waxahachie.

According to the city of Cedar Hill’s website, the AmBus can accommodate up to 18 patients on stretchers and five more in wheelchairs. The AmBus is part of a Texas Department of State Health Services mission to provide maximum first response services during mass casualty incidents, with rapid hospital evacuations, and for on-site medical rehab for responders. There are four AmBuses in North Texas: Cedar Hill, Frisco, Sherman, and Fort Worth.

The evacuation started at about 7 p.m. Monday and was completed around 7:15 a.m. Tuesday.

“Waxahachie ISD sent drivers with their buses,” Moon said. “A lot of those patients were just wheelchair-bound and could not walk. So WISD sent us four buses with the wheelchair lift on them. With those, you could only haul two wheelchairs at a time. Their buses have got a place where you can park the wheelchairs and lock them down so that they are safe. It was a big group effort.”

Waxahachie City Manager Michael Scott applauded the efforts of everyone involved that got the residents to a warm location.

“We value our friends and partners who came to help,” Scott said. “It was a blessing to have them come and help out.”

Focused Care wasn’t the only nursing facility evacuated as a result of power issues related to the inclement weather. In an email, county Emergency Management coordinator Samantha Pickett confirmed Pleasant Manor Healthcare and Rehabilitation in Waxahachie was also evacuated, with residents taken to Baylor Scott & White Medical Center – Waxahachie. She said their return back to their facilities depended on the restoration of services.

“I know [the state Department of State Health Services] has long-term care facilities develop emergency plans for moments like these,” she said. “The plans should include a check list to inspecting before returning.”

Although the facilities’ resident evacuations decreased bed capacity at Baylor Scott & White Medical Center – Waxahachie, the facility was not under any type of patient diversion as a result, she said.

“One, just the extreme cold and just trying to stay warm to handling calls,” he said. “Fortunately, most people have used pretty good judgment and minimized the amount of travel that they are doing. We have the 911 center operational and the patrol officers out there working.

“We have had issues in our building just like everyone else,” he said. “We do have generator power. We had some mechanical issues, so our heat was not working too well. We have had problems with getting fuel for the cars, but I think that we have worked that out.”

Goolsby said the officers are adaptable and “handling it great.”

He noted that the Ellis County Homeless Coalition had made arrangements to get the homeless population into shelters, with police working with the coalition members to speak with those residents. They were able to get most of them into a warm place indoors, he said.

“We have been a little busier, but I would not say too much,” he said. “I think that people being safe and staying at home and when they are out and about, they are taking care and precautions.

“Just make sure you keep your pets inside, stay hunkered down, keep as warm as you can, and stay home if you can,” he said. “If you have to get out, take it real slow.”

During the weather event, firefighters stationed at the downtown fire station on Main Street had to relocate when the facility’s backup generator failed due to the cold. Firefighters moved to Station No. 2 on Cleaver Street on Monday, returning to Station No. 1 on Tuesday after electricity was restored.