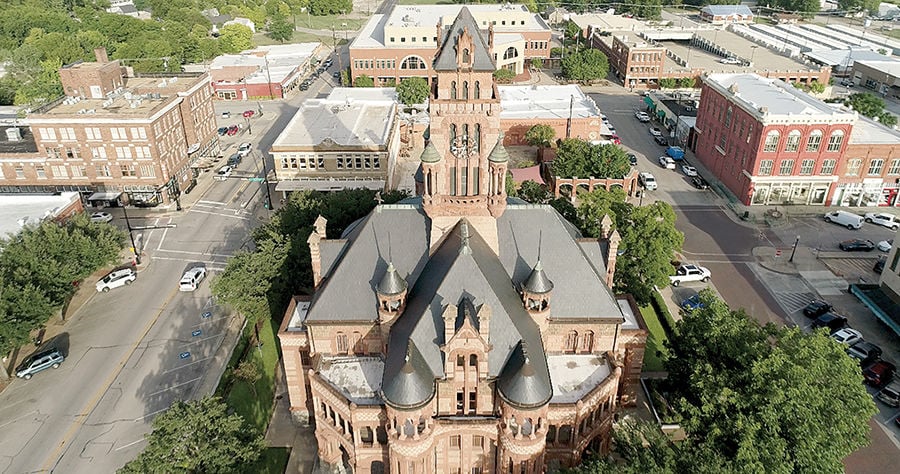 A view of downtown Waxahachie and its historic courthouse as taken by a drone owned by Maverick Drone. 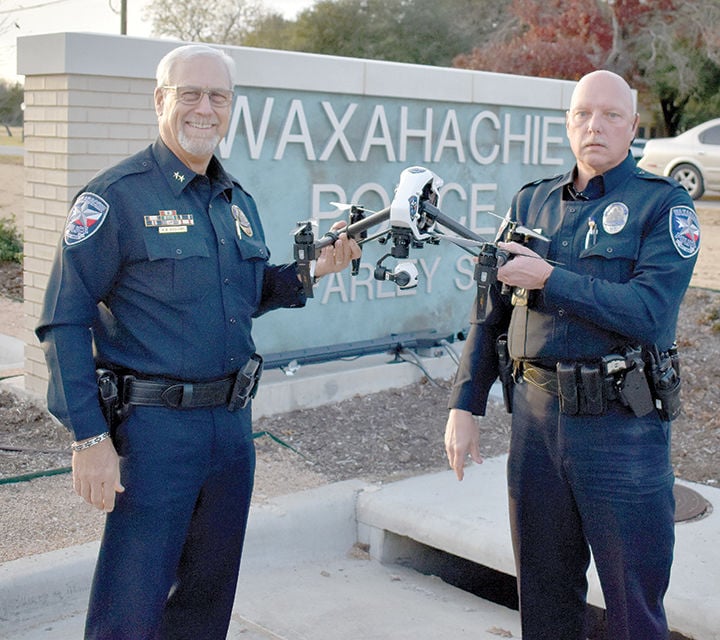 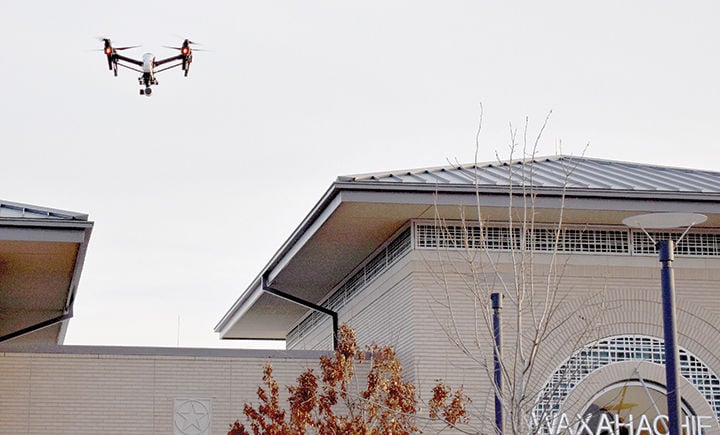 The Waxahachie Police Department’s drone on a flight Wednesday.

A view of downtown Waxahachie and its historic courthouse as taken by a drone owned by Maverick Drone.

The Waxahachie Police Department’s drone on a flight Wednesday.

Drones have become known by many as the eye in the sky. For Waxahachie Police officers and firefighters, they feel that a bird’s eye view provides a unique advantage as they seek to protect lives and property.

Waxahachie Police officer and drone pilot David Bittle said drones are another asset that can be used to document a crime scene, map a vehicle accident or conduct a search for a missing person.

“It is a fraction of the cost of a helicopter or an airplane if you have to take aerial photographs of something,” Bittle said. “The software allows us to map crime scenes or a crash scene. It allows us to open a roadway much faster than we were able to before. Instead of hours, we are talking minutes.”

The department is training four additional officers so the drone can be used on any of the four patrol shifts. The classroom instruction is about four hours followed by a day of hands-on learning to fly the aircraft. Bittle, who is also a licensed private pilot, is conducting the training on the drone.

“It is really simple to fly because these things are operated by GPS and barometric systems,” he said. “So, if you let go of the sticks they will hover so long as it has got a good GPS system. The thing about learning how to fly is learning the controls and the sticks: what makes it move forward, up, down, backward and sideways. Also knowing the speed and how to take off and land. It is pretty simple.”

Bittle said the potential drone pilots are put through an obstacle course at the end of their training, so they know how to operate the aircraft in any direction. When the drone is used on a call, one police officer flies the drone while another one serves as a spotter looking out for hazards such as powerlines and other aircraft.

Concerns have risen from the public about the use of drones in that they might be conducting surveillance or taking unwanted photographs.

Waxahachie Police Chief Wade Goolsby wants to assure the public that his department’s drone use is strictly to aid in investigations and to save lives.

“I think that you first have to realize that there are several categories of users. There are public safety users, police and fire. Then there are business users like professional photographers. I think that both of those entities know what the rules and regulations are and are very cognizant of people’s privacy,” Goolsby said. “Then there is the casual consumer that buys one for fun. I think that is where their concern comes from is from those casual users who are out flying around and end up close to their house.”

Goolsby said the police department understands their concerns and advises residents not to act themselves but to contact law enforcement in these cases.

Bittle shared Goolsby’s thoughts, saying residents need to educate themselves about the rules and requirements the FAA has in place for drone usage: whether as a commercial drone user or as a hobbyist.

“If you want to fly a model aircraft as a professional, you must pass an FAA knowledge test and you have to get a remote pilot’s license. It costs money to take that test. Those guys know all the rules because they have to take a knowledge test beforehand to operate as a commercial pilot,” Bittle said. “If it is flown specifically for hobby use, they have to fly under specific rules. You can’t be up there making a movie and putting it on YouTube and making money off it because that makes you a commercial pilot.”

The Airport Cooperative Research Program advises people to fly their drone below 400 feet, fly with local model airplane clubs, inspect the aircraft before flight and take lessons. It also encourages people not to operate their drone beyond the line of sight, not to fly near an airport or manned aircraft, people or stadiums, not to be careless or reckless, and not to fly with anything that weighs more than 55 pounds.

Mid-Way Regional Airport manager Judy Demoney said drones are not to operate within five miles of an airport.

Drone operators need to contact the airport before conducting a flight, she said, noting that the information collected by Mid-Way includes the drone’s registration number, operator’s name and cell phone number, where the flight is being conducted, time of flight and its duration.

Demoney recommends operators download the free app from the FAA called “B4UFly.” The app gives legal information and allows a person to check flight requirements and airspace restrictions for a specified time and location. It will also show all airports in the area.

Bittle said the city does not have any ordinances related to drones at this time but the state does.

“The state has some laws that specifically address drones,” he said. “The two main ones that people are going to be concerned with are with illegal use. The illegal use is if a person uses an unmanned aircraft to capture an image with intent to commit surveillance on an individual or on a property.

“So that is a class C misdemeanor and that is like a traffic ticket,” he said. “If we can find the person that did that and prove that they did that but they deleted the images, it is a defense to prosecution. If you display or distribute them with malicious intent that bumps it up to a class B misdemeanor.”

Goolsby advises residents not to take the law into their own hands by shooting a drone down if they see one operating near their property.

“There is nothing that authorizes you to shoot that drone,” he said. “You would be the one getting in trouble for doing that. One, discharging a firearm in the city limits and, second, destroying someone’s piece of property just because you were offended by it is illegal.

“Depending on the type of weapon or the danger that it put somebody else in the charge could certainly go up if they were careless with where those rounds went and that kind of thing,” he said. “It could become deadly conduct, reckless damage or disorderly conduct. If a round would hit someone you are talking aggravated assault or manslaughter if somebody dies from it. It is not a good idea.”

Waxahachie Fire Lt. J Martin said the fire department’s drone has been a great benefit to the department in expanding its operational capability.

“What we have been able to utilize it for this year is grass fires, which makes a world of difference,” he said. “Typically, a command is relying on a division commander in the field to see what is going on in an area. He kind of has to imagine where he really needs to focus resources.

“A couple of grass fires that we have had, the incident commander got to see an overhead shot of the whole scene with what is going on,” Martin said. “This allowed him to directly contact resources to say, ‘This is where we really need to go to stop the fire.’ ”

The drone also can be used in a high-water rescue situation, Martin said, noting that the view allows firefighters to see what obstacles they could face in the water and plan for them. It can also carry a lifejacket out to a person stranded on top of a vehicle. The department hopes to purchase a thermal camera in the future so firefighters and police have the ability to search for someone at night.

Martin said he wants to assure the public that, when the department’s drone is in use, it’s being used for emergency purposes only.

For more information about drones and their usage, visit www.faa.gov.

To fly an unmanned aircraft for work or business purposes (thus being a commercial pilot), you are required to follow requirements set forth b…